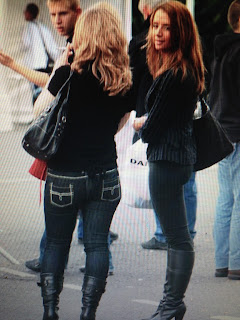 The jeans denim explosion especially since the late 1990s and which went even further in the last decade and has probably gotten even bigger in the first two years of this decade especially with skinny denim and leather jeans for women. And with skinny jeans for women that have been around since 2005 or 06 which as guy I gotta admit I think it's great checking out sexy women who love their tight jeans. Especially checking out sexy female celebrity's in their tight jeans. And now that even tight jeans have become such a versatile pant for women, no longer considered just a casual pant. It has completely changed how sexy women dress in and out of work.

With women now wearing skinny jeans to the office, not just on Casual Friday, as well as out on the weekend and at night. And wearing them in all weather not just in the fall or winter. But during hot humid summers, like in the Mid-West, Mid-Atlantic and Southeast. Wearing tight jeans not just with t-shirts and tank tops, but with sweaters, blouses, suit jackets it's become very important for women to make sure that when they are out in tight jeans or shopping for tight jeans, that they are wearing the tight jeans and buying the tight jeans that show off their bodies as best as possible.

That they don't wear tight jeans that make them look fat, skinny or look like hookers. Like with the famous ass crack jeans of 2001-02. Where if a women sat down or bended over, she was at risk of revealing her ass crack and perhaps seeing it on TV or the internet or both. Especially with the camcorder revolution and people being able to record video on their cell phones. Low-rise jeans, skinny jeans good. Ass crack jeans bad, women should find the balance that makes them look sexy in them. And shows off their figures but doesn't make them look like prostitutes looking for a man to pay their bills.

Perhaps this video can help women find that right balance. Also for me anyway, not a fan of trouser jeans, they might be stylish for a women and make them feel like they can wear jeans to work and still look dressy or professional. But the office far as I'm concern might be the only good place for them. I'm not going to get the feeling to check out a women, I don't care how sexy she is physically, just because she's wearing trouser jeans. I would get the same satisfaction checking out a women wearing baggy sweatpants or slacks.

Denim to me on women anyway, like leather are meant to be tight. One reason why there are both denim jeans and leather jeans and a lot of women and men shopping for both denim and leather jeans that are the tightest possible without sucking the blood from their legs so they can no longer walk. Sort of like that Seinfeld episode (sorry I watched the show a lot) where Kramer was wearing designer jeans from like 1982 or something that were so tight that he literally couldn't move his legs in them.

So low-rise and skinny jeans great, jeans with boots, whether they are under or over the jeans are great. The tight dark wash designer jeans explosion for women in the late 1970s, the greatest advancement in style for women I believe ever. As far as Sex Appeal goes but women should where the jeans that are best for their body and don't buy jeans that are for another body. That just causes problems.
Mary Queen of Shops: Designer Jeans Advice From Mary Portas
Posted by Derik Schneider at 12:27 AM 0 comments