RT America: The Big Picture with Thom Hartmann: "How & Why Other Countries have Ended the 2-Party System": How to Reform The American Political System

There are a lot of things that I like about the American Political System, I like the fact that I get to decide for myself. Who should represent me in Congress, who should be my Representative and two Senators, who should be the President and who should be the Governor, these are basic Liberal Democratic Values. That Socialist Democracies don't understand that feel the need to put the power in the hands of the parties to decide who represents who and what the voters get to decide. Is which party represents the people and in what office, rather then which individuals. We are simple more Liberal and individualist as some of these Socialist Democracies and prefer to have the freedom. To make these choices for ourselves as much as Progressives may hate this, what I don't like about our Political System, is our Two Party System, to me in a country this huge, thats situated between two large oceans, that is continental wide and a country of 320M people. That is as politically diverse as we are, going from Socialists on the Far Left, to Neoconservatives and Theocrats on the Far Right. Two large political parties, one thats made up of Liberals and Progressive/Socialists in the Democratic Party and the other made up of what's left of Conservatives in America. And Neoconservatives, a two major political parties is simply not large enough.

What we have in America is simply two parties that both have three parties in them, each party has like a mainstream base. And other factions that are more ideologically in sync with one of the major parties ideologically but ideologically a better fit to be in one of the third parties. But are with one of the major parties, for political reasons prefer to have a say in what they would call the better choice amongst two evils. So in the Democratic Party you have Progressives who are ideologically a better fit with the Democratic Socialist Party or Green Party or Progressive Party, like the Progressive Caucus but are Democrats so they can have a say in a Center Left party. Rather then a party thats much more to the left politically and in the Republican Party, you have Libertarians like the Ron Paul's who are Republicans so they can get elected and its really that simple. For Neoconservatives they've taken over the GOP and today's GOP is the home of Neoconservatism in America, people like Rick Santorum and Michelle Bachmann.

What we need to do is keep our Direct Elections and not take the power out of the people to decide. Who represents them in Congress or who is President of the United States the most important job in the World but we need more choices, we need to break up the Two Party Monopoly . And allow for Socialists, Libertarians, Constitutionalists to have universal ballot access and require all Federal Candidates and Incumbents to have to get 51% of the vote to win the election in the first round. And then have run offs in the elections where someone doesn't get 51% of the vote, between the top two or three people in the race, until someone gets that 51%. As well as eliminate gerrymandering, so where we can end a lot of the slam dunk reelections that we have in Congress right now, so we have more competitive elections, as well as Full Disclosure. So we know whose funding our elections.

Thats what we can do in the short term, long term we need to break up the Democratic and Republican Parties a little bit. So Progressive Democrats can go home so to speak and become part of the Progressive, Socialist or Green Party or perhaps those factions form into one Progressive Party. That could compete with Democrats and Republicans long term and the Neoconservatives take a hike and form their own Far Right Party and we can get back to having a. Liberal Party and a Conservative Party, as well as a Progressive Party and a Libertarian Party in America, as well as a Neoconservative Party where we are represented across the board ideologically as a country.
Posted by Derik Schneider at 10:02 PM 0 comments 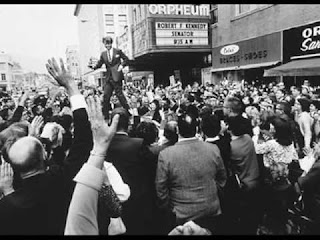 Senator Ted Kennedy, gave the best line of the RFK Memorial. Where he quotes bis brother by saying that, “some people see things and wonder why, I dream things that never happen and wonder why not.” Which goes to the heart of Bobby Kennedy’s idealism. Bobby Kennedy, wasn’t a hopeless Utopian who saw things that were simply impossible happening and would put these dreams in simple terms. But what he would do is see problems that the country is facing and see us as a country the greatest and wealthiest country in the World. With the resources to solve a lot of the problems that we face, as solvable and that we can and should solve these problems.

Because we are simply too great a country not to confront these problems, especially as a developed nation with the largest economy in the world. It’s not that we don’t have enough resources to solve our problems, but that we simply don’t use the resources that we have to solve the problems that we face. That perhaps the problems that we have are part in due to the fact that we’ve simply misused some of the resources that we have as a country. And we would be better off instead destroying other countries in the name of defeating communism, that we would instead build our own country at home. Bobby Kennedy, loved America and wanted to create an America that worked for everyone. Where all Americans could live in freedom and not have to live in poverty, or under racial discrimination.

Posted by Derik Schneider at 1:37 AM 0 comments