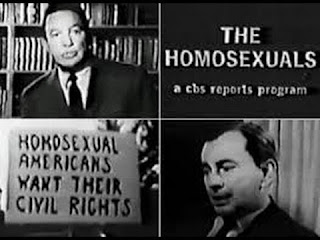 The 1960s especially the late 1960s, was a very good decade for homosexual Americans. Because the country was becoming freer and more liberal as a country. We were becoming more free to express ourselves as a country, unlike the 1950s where the country was very conservative culturally. And where homosexuality was considered a sin, or a disease. We were sort of a big government statist country back then. Especially for a country that’s supposed to be a liberal democracy.

But the 1960s changed that with the Baby Boomers coming of age and Hippie Culture coming into our culture. Where people including gays were encouraged to be who they were and no longer hide who they were. That there was nothing wrong with being gay in public. That there was nothing wrong for men to be attracted to me and for women to be attracted to women. And for men to be feminine and for women to be masculine. That Americans gay, or Straight, should be who they are. Which of course pissed off religious and Neoconservatives in America who have this very narrow view of what it means to be an American. And that has nothing to do with being gay and today have to be expanded that to being that Islam is Un-American as well.

Freedom for homosexuals just expanded in the 1970s and 80s, where it became more acceptable and where you would see men wearing pink shirts in public. And women dressing butch in public and to the 1990s where we saw Gay Pride Parades. And that discriminating against homosexuals because of their sexuality was considered wrong. Just look at where the country was ten years ago on same-sex Marriage. Where the whole notion was considered some fringe idea, to by 2004 states like Hawaii and Massachusetts were passing same-sex marriage laws.

Vermont passed civil union Law in 2003-04, to today where roughly half the country, little more, or less supports the idea of same-sex marriage. Where even now the President and Vice President of the United States now support marriage equality. We’ve come thousands of miles in just the last few years when it comes to tolerance for homosexuals. I say all of this as a straight Liberal man who believes that all people have a right to tolerance and respect under law in this country. Until they lose that right by hurting other people. But as long as we are all good people, we should be treated as such, and not by who do we sleep with and are attracted to the opposite gender, or not. But instead we are treated by how we treat other people rather than what we do in our private lives.

Posted by Derik Schneider at 2:42 AM 0 comments