Without the O.J. Simpson trial would we of gotten so-called reality TV that became popular in the late 1990s or so? The O.J. trial was reality TV because it was real and it was happening everyday. Not wannabe celebrities who find themselves on a TV show and act out trying to make a career for themselves as a full-time celebrity if nothing else. And this certainly wasn’t a fictional drama. This was a real thing with real murder victims and a real defendant.

And not Joe Smith Pittsburgh truck driver defendant who perhaps was caught driving his truck drunk and ends up killing someone as a result. This was one of the most popular celebrities and former athletes of all-time. Who also made a career for himself as an NFL analyst for NBC Sports and as well as a somewhat accomplished movie actor and corporate spokesman. Who also lives in the entertainment capital of the world in Los Angeles. Who was culturally and racially mainstream and loved by Americans of all backgrounds.

If you want to know why celebrity culture at least in my opinion is out of control and why it now replaces and takes over for hard news, I give you the O.J. Simpson trial of 1994-95. Perhaps the two most unforgettable years at least in the last twenty years or so. Because now you have the internet, even in its early days to go along with cable news. And then throw in where it happened and who the defendant is and there’s no secret why this case got as much attention that it did. 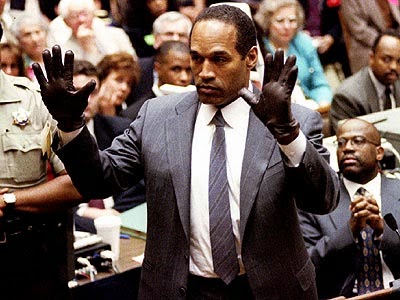 Posted by Derik Schneider at 3:15 AM 0 comments