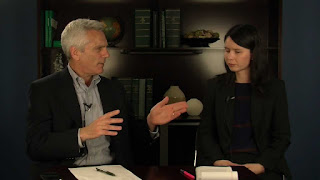 Progressive Economist Jared Bernstein is someone who I have a lot do respect for. I thought he did a good job for Vice President Joe Biden and helping him to manage the 2009 Recovery Act. And was a good spokesmen for the Vice President and the Obama Administration. I like the progressive think tank, the Center on Budget and Policy Priorities. That he now works for, not that I agree with them on a regular basis. But because they are professional and are interested in reporting facts and data. Unlike lets say Think Progress which is more of a partisan hack for so-called Progressives. And the Heritage Foundation, thats a partisan hack for the Neoconservatives.

Keep in mind when Jared Bernstein and his colleague at CBPP Chye-Ching Huang say raising taxes on the wealthy, is a good way to cut the deficit, they are both Progressives. But also keep in mind they are professionals and practical. They aren't saying we should let all of the Bush tax cuts expire, including on the middle class. Which is what a lot of so-called Progressives want to do. Like the Congressional Progressive Caucus to use as an example. But they also again because they are professionals have data and evidence to support their claims.

Going back to the Clinton presidency when the Federal budget was cut, to go along with tax hikes on the wealthy. Which contributed to taking a 290B$ Budget Deficit for Fiscal Year 1994, to a balanced budget by 1998. Whereas so-called Progressive more left of them, can't back up why raising taxes on the middle class and not cutting the Federal budget, except for the military and War on Terror, would be good for the economy. A difference between facts and ideology.

My approach to cutting the debt and deficit, gets to reform, cut and decentralize. Reform the tax code, by eliminating the income tax. And replacing it with a Progressive Consumption Tax. Reforming how the Federal Government operates. By having it do less and passing more responsibility onto the private sector and states. Not by eliminating good programs that perform a good service, just getting them off the Federal budget. Cutting and reforming the military budget, by getting it out of areas we don't need to be in. Like in developed nations and having a larger presence where we do need to be. Like in counterterrorism. But these two progressive economists can at least back up what they believe and why they believe it.