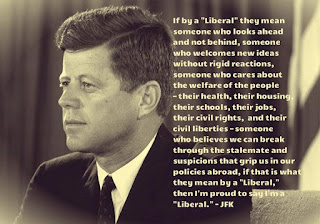 When then U.S. Senator John F. Kennedy after serving almost fourteen years in Congress both in the House and Senate, one his first speeches that he gave after he won the Democratic nomination for president, in I believe the summer of 1960, was about liberalism. Because as a Northeastern Massachusetts Democrat he was being accused and I mean being accused as if being a Liberal is a bad thing, like being called a traitor or something, of being a Liberal and having a liberal voting record in Congress.

And Senator Kennedy gave a speech at the New York Liberal Party Convention in the summer of 1960. And what he did there was to define his liberalism and what liberalism is about and so-forth. And I’m paraphrasing here, but Senator Kennedy said something to the effect, ‘that if being a Liberal is about creating a superstate to take care of everyone so Americans no longer make decisions for themselves with all sorts of government programs to take care of them, or being soft of defense and not willing to do what it takes to defend the country, or being irresponsible with the taxpayers money, then I meaning am not a Liberal.’

But then Senator Kennedy went on to say, ‘but if Liberal means someone who cares about the general welfare of others, someone who believes you need to be strong at home before you can be strong abroad, that freedom at home is just as important as freedom abroad and that all Americans should have access to freedom and not just the special few, then I’m a Liberal.’ Now to interpret what Jack Kennedy said because today’s so-called Progressives use the term general welfare to mean big expansionist central government to take care of everyone.

Modern Progressives see JFK to mean that JFK was a New Dealer, or Great Society champion who was a welfare-stater. Someone who wanted government to have all sorts of programs to take care of people. The problem with that is what JFK said himself that if being a Liberal is someone who believes in creating a superstate to take care of everyone, then he’s not a Liberal. So it is his own words. The way I interpret what JFK said was that he wanted freedom to be available for everyone. And that government had a role, but not the only role, because JFK also believed in limited government.

In many of ways I like to look at myself as a Jack Kennedy Liberal Democrat. Not so much him as President, but his overall vision for America and what he believed individual liberty means and that it should be available to all Americans. Not the special few, or just for people of a certain race or gender. That where government comes in is to assure that all Americans have access to live in freedom. At least as adults and be able to take care of themselves and not have to be dependent on government. Or private interests for their well-being, but the ability to live in freedom. Which is why my message of economic liberalism tends to be about quality education and job training for all who don’t currently have access to it.