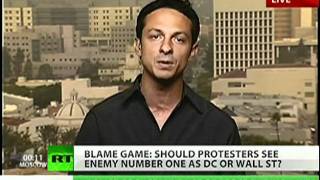 Is Occupy Wall Street just that or is there more to it? Is this a group of people that just want to voice frustration, or are they looking for progressive change in America? What's clear is that this movement is diverse and not centralized. That it has Socialists, Liberals and even Libertarians in this movement. So of course they are not united in how to replace what they are against, because these are three different political factions. That all have different approaches and different visions in where they want America to go.

Both Democrats and Republicans, would risk losing campaign support and contributions. "Don't offend the people who pay your mortgage. Or you may be left homeless." Which is why I believe both parties have been reluctant to get behind the Occupy Wall Street movement, because they are worried they could lose support from Wall Street. The people contribute a lot of money to their campaigns. The Socialist in this video clearly backs up my point here, with all the resources that America has. He would like a lot of them to be used to provide "free health care, health insurance, higher education, universal pre-school", etc. Through the Federal Government of course, through higher tax rates. And perhaps new taxes as well.

Which would want to make the Federal Government a hell of a lot bigger than it is now. And try to make America look a lot more like Britain and Sweden. I heard some supporters of this movement and few people comment on YouTube as well, including Democratic Socialists like progressive radio talk show Host Thom Hartmann, call for the return to the 1950s Tax Rates. 70 and 90% Tax Rates, lowest tax rate starting at 25%. Again to pay for all of the social insurance programs that they are advocating. So the political agenda from Socialists is pretty clear and they've been outspoken about it as well.

The democratic argument is basically that we as Americans,  have too much individual  freedom. And as a result a lot of people make too much money. Especially as it relates to the rest of the country. And they want to scale a lot of that economic freedom back. Because they would argue that together as one country we can be more equal with much higher tax rates. The Federal Government providing a lot more public services. What would be nice is to see a video or talk show, where they have a panel of at least one Socialist, Liberal and Libertarian. Because all three of these political factions are fed up with Wall Street. And their relationship with Congress and the Administration. And would all like to see reform. But what would be interesting about a show like that would be the diversity of it. That it's not just Socialists who hate American capitalism that would be on it. But a broader range of people in America that would all like to see reform in America. And how government operates. But they would all offer different alternatives.

Posted by Derik Schneider at 2:16 AM 0 comments