The Objective Standard: Dr. Martin Luther King on Government and The Individual 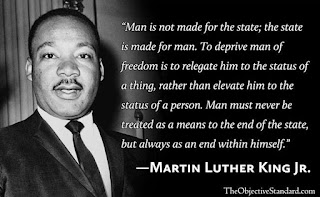 This piece was originally posted at The New Democrat

Politically Dr. Martin Luther King, politically was a Democratic Socialist and proud of it. At least when it came to economic policy and foreign policy. He was a democratic collectivist in the sense he believed that the job of government especially the central government, was to see that everyone was taken care of and no one had to go without. And believed in the democratic socialist model of the welfare state that is common in Scandinavia, where the job of the central government is to seen that a lot of the people's needs are met by the government. Education, health insurance, health care, child care, very generous benefits for the working poor and non-working poor, etc. But he also had what's called a classical liberal streak (that I call a real liberal streak) where all Americans are entitled to basic individual and equal rights. This quote in this photo is a perfect example of that. Where he's saying that, "man is not made for the state, but the state is made for the man.

Individuals, don't get their power from government, but vice-versa. All of our elected officials are exactly that. They have to run in order to serve us and be given the power and responsibility that we the people give them. The people aren't required to serve the government and serve the politicians, other than obeying the law and cooperating with law enforcement. We don't have all of these individuals rights under the Bill of Rights, because the current party in power at any given time says we do. Those individuals rights are constitutional and guaranteed under the U.S. Constitution. And it's the job to make our rights are protected. Not to pick and choose who has them and who doesn't. Which is one reason why I'm such a big believer in civil liberties and freedom of choice and so opposed to political correctness. Dr. King here is speaking for We The People in an individualist way. Saying that we as Americans have basic individuals rights that don't come from government.