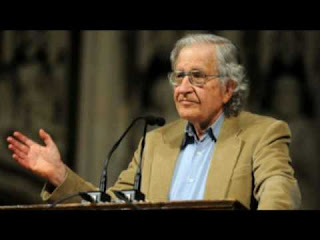 As Author Noam Chomsky has said a Libertarian Socialist sounds like contradiction in terms at least in America. Because socialism is about collectivism and equality, making sure that no one has too much more than anyone else. And that government should be used to essentially take care of society so people don’t have to do too much on their own. Whereas libertarianism is about individual liberty similar to liberalism. That the people should have the freedom to live their own lives and have maximize freedom both socially and economically. And that people should be able to make as much money as they can legally without paying high taxes.

Whereas Socialists believe that no one should make a lot more money than anyone and that they use high taxes to keep that from happening and give that tax revenue to the less-fortunate. And to finance a massive welfare state, at least by American standards. A Libertarian Socialist would be a contradiction, if socialism was just about economic policy, but its not. Socialism is not just an economic policy, but a developed political ideology that also has other political views. Like on social policy, law enforcement and foreign policy.

Socialists and I’m not talking about Communists, because communism is a separate political ideology from socialism, tend to be liberal to libertarian on social issues. Just look at Sweden for example, a social democracy that has a lot of social freedom. And they tend to be dovish on law enforcement and foreign policy as well as isolationist on foreign policy like Libertarians. Classical Socialism or Marxism, tend to get mixed in with democratic socialism. Tends to get mixed up with liberalism. But liberalism is a different political ideology from both classical and democratic socialism. See, socialism is a diverse and multi-demential political ideology. Its more than an economic policy.

I’m not a Socialist in any form, classical, or democratic. Not even a Libertarian Socialist. I’m a liberal and been described as a Classical Liberal, but one thing that I respect about socialism is it’s diversity. There’s classical socialism, where the state owns the means of production in society. Meaning the economy. And then there’s democratic socialism with a private sector, but that’s highly taxed and regulated. Again by American standards, to finance a massive welfare state, again by American standards. It’s not just an economic policy, but a developed political ideology.

Posted by Derik Schneider at 3:43 AM 0 comments

Thom Hartmann: Private Prisons in America: Incarceration is a Role for Government

If you look at what the Role of Government is, protecting society and Law Enforcement which includes corrections meaning prison. Is something that most if not all sane sober people can agree is a Role for Government. Whether your left, right center, confused, blue, red, purple, green whatever. Protecting society which is the main role of prisons, so inmates can't commit more crimes against society then they already have, is the number one job for government. If government can't even do that right, which is where they generally do a good job. Then they are useless and we don't need government for anything. People should not be making money, that is have a Profit Motive to keep people in prison. Prison is designed to keep criminals off the street to protect society, not designed to be profitable. Private Business should not have motive to lobby government to pass more laws that ends up incarcerating more people, just so they can make more money housing more inmates or to keep people in prison longer just so they can make more money incarcerating them. The idea behind behind Private Prisons and Private For Profit Prisons, is that the American Corrections System is too expensive. The Federal, State and Local Governments are all under tight budget crunches and are looking everywhere to save money. Including in Law Enforcement and Corrections . All right point taken at least on my part, I'm not going to pretend I'm physic and speak for everyone else.

But lets examine why shall we. We have 2M people in prison in America where we are now spending more money on prisons then on Public Education and Public Infrastructure. An easy but correct answer would be that we arrest too many people for too many things. Things that are technically crimes but that don't hurt anyone. But since government feels the need to protect us from ourselves and show us the way so to speak. They arrest us for things for the good of our health but then throw us in prison which is bad for our health. Which is a contradiction the size of the Grand Canyon. Things like gambling our own money, smoking or possessing or selling marijuana and getting paid to have sex, meaning prostitution.

I agree that our Corrections System is too expensive and a Money Pit in a lot of cases. Fine but before you try to solve a problem and before a good doctor anyway writes a prescription. For their patients Medical Condition, they give the patient a diagnosis first so they well uh, know exactly what the problem is they are trying to fix. Which is exactly what we should be doing with our Corrections System. We arrest too many people for too many things that shouldn't be illegal in the first place. We don't prepare our Prison Inmates for life on the outside, so once they get out and most inmates do. They end up back in prison because they don't have the life skills that they need to be successful in life legally. For our Non Violent Offenders that need some type of Public Supervision, like robbery, shoplifting to use as examples. We send them to prison and in a lot of cases for long sentences and they take up space that should be saved for our actual dangerous criminals.

All right thats you diagnosis from Dr Erik, here's my prescription. Lets stop arresting people for crimes that don't harm others in society and I would start with the examples that I mentioned. Lets prepare our inmates for life on the outside, the inmates that we can work with. With education, Job Training and work and make our Prison Industry's exactly that. Something that can benefit the prisons, inmates and society. And lets establish Alternative Sentencing for our Non Violent Offenders that don't represent a major threat to our economy. Like with Drug Rehab, Halfway Houses, Boot Camps. Things that would pay for themselves by the inmates themselves.

Crime and Punishment actually represents a Role for Government, because we are talking about Public Safety here and is something that we have to get right. And is not something we should be putting profit over safety. Which is what Private Prisons are about.

Click on the link of the blog to see a video with Thom Hartmann on Private Prisons
Posted by Derik Schneider at 3:02 AM 0 comments