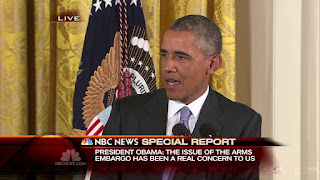 President Obama, once again nailed it, when he said that without this deal, which is of course is a deal, Iran would get the nuclear weapons that they want anyway. There are four choices here and only one of them are good. You do nothing else other than current economic sanctions that are crushing the Iranian economy, but not stopping them from pursuing nuclear weapons. You try to take the Iranian nuclear weapons program out from the air with air strikes. Even though they have nuclear power plants underground. You invade the country, go to war with them and if you’re successful there, then you try to take the weapons out that way. Or you prevent Iran from pursuing nuclear weapons peacefully. Which is what dealmaking and compromise is about.

Compromises and deals, by definition are imperfect. You get something you want, or need by giving up something you don’t need, or value as much. With this deal, we can prevent Iran from obtaining nuclear weapons, in exchange if Iran complies with the deal, they get economic and sanctions relief that will benefit their economy and their people. Which would make the Iranian Government look better with the Iranian people, but also makes America look better with the Iranian people as well. Who doesn’t like their government, but aren’t fans of the U.S. Government either.

What would the opponents of this deal and President Obama do instead? Invade Iran, a country the size of Saudi Arabia physically, but with seventy-five-million people? Even though they wouldn’t support any resolution that would empower President Obama to take America to war with Iran. Again with the air strikes, Congress wouldn’t support that most likely . And the Iranian Government has nuclear power plants underground. Continue to negotiate for a better deal? What would a better deal be? Iran, is going to have to get something substantial out of any deal, or they aren’t going to sign on to it. President Obama, got the best available deal here that could actually work. And deserves a lot of credit for it.