A big part of our current poverty situation now twice the size of our official unemployment rate. Both the official poverty and unemployment rates in the United States. Has to do with the Great Recession which ended in the summer of 2009 but the effects of it are still being felt. Almost four years later especially by Americans who weren't doing very well prior to the Great Recession but perhaps at least had a job at that point. But add the Great Recession to these issues, now we have people in poverty doing worse but perhaps not even working now. And then you add people who are educated and in the middle class as late as 2008. Now having to use public assistance like SNAP which is food assistance in this country for people who can't. Afford to buy enough food to eat and we've seen this program grow by leaps and bounds perhaps the largest growing social insurance program in the Federal Government. Because it benefits Americans who are unemployed but who are also not working as a result and we've see fraud in. This program grow as well.

And the way to combat these issues which would also help us pay down our debt and deficit. Is simply to have fewer people on these programs and that might mean kicking people off of them. Who've simply committed fraud, like selling their cars for the money and then reporting their cars. Stolen so they can have money to buy another car or simply pocket that money or at least sanctioning these people. So this type of fraud is not committed again, which would be my suggestion unless they are career criminals or something. But long term the best way to have fewer people collecting from these programs, is to have more skilled workers in this country. Especially amongst the unemployed but also low income workers so we don't have as many people who need to use these programs.

A good way to cut your debt and deficit and to cut fraud in the government. When it comes to public assistance, is simply to have less people collecting from those programs. Not simply by just kicking them off but empowering them to be able to work themselves off of these programs. And that gets to things like education, job training and job placement.
Posted by Derik Schneider at 10:52 PM 0 comments

Divinity: Video: Martin L. King: I Have Been to the Mountaintop Full Speech

Divinity: Video: Martin L. King: I Have Been to the Mountaintop Full Speech

I don’t believe there are many people perhaps in the history of the world, but certainly in the history of the United States who had better timing than Martin L. King. And I say that for a few reasons, but just take when Reverend King gave this speech and when he died. Which was the next day in 1968 and then look at, or listen to what Reverend King said in this speech and what was in it and what he had to say. Which I at least believe was vision for what the civil rights movement was all about.

And what it meant to be an American no matter your race in a liberal democracy such as the United States. Where we all under the United States Constitution are to be treated equally under law with the same constitutional rights and freedoms as any other American. That we aren’t supposed to be treated better, or worse by law in this country. And that’s just one reason why the way African-Americans were treated in America prior to the civil rights laws of the 1960s was simply unconstitutional. Because African-Americans were treated worse than Caucasian-Americans under law in this country.

What Reverend King was saying in this speech was that he’s seen the mountaintop of where all Americans were being treated equally under law. That this vision is real where no American has to live in poverty. Without the basic necessities and skills to be able to live well in life. That we aren’t there yet and you might not see him there with you, but this vision is real and we can get there together as a people. If we keep moving forward as a people and a country to build this society where no race of people is treated worse under law simply based on their race.

That we can accomplish this and get there together if we keep up the fight and struggle for equal and human rights in this country until we finally reach the mountaintop. And finally accomplish what we’ve struggled for all of these years. Thats what this speech was about as far as I’m concern at least and what Reverend King was telling his supporters. That even if you don’t see him there with you, he’s already seen the vision of what we are fighting for. And know we can get there if we keep on moving the ball forward until we get there.

Posted by Derik Schneider at 1:14 AM 0 comments

RFK Must Die: RFK Campaign For President 1968 Ad- The Environment 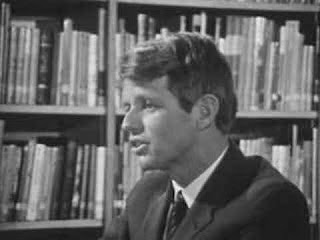 The environmental movement in the late 1960s, which was just becoming big to the point today and perhaps even twenty-years ago that national Democrats at least couldn’t win without them. Especially if they were running for president, but they couldn’t win in Congress without the environmental community unless they represented a very rural state, or district that was heavily dependent on oil, gas and coal. States like West Virginia, to use as an example. America changed a lot politically in the 1960s where the Democratic Party started truly becoming the liberal or progressive party and the Republican Party starting to become the conservative party. With both parties still have moderate factions in them, but just not as big as they use to be.

Senator Kennedy, made the environment a big part of his 1968 presidential campaign. But it was more about regulations of energy industries and not so much about his own national energy policy. And had he been elected president in 1968, we probably get an EPA and perhaps an Energy Department as well. Instead of President Richard Nixon creating the EPA and President Jimmy Carter creating the Energy Department. It was also President Nixon that pushed for the idea of a national energy policy and getting off of foreign oil and gas. President Gerald Ford and President Carter, wanted to do the same thing, but differently at least in President Carter’s case. But making the environment a real issue was still very new when Bobby Kennedy ran for president in 1968.

Posted by Derik Schneider at 1:04 AM 0 comments