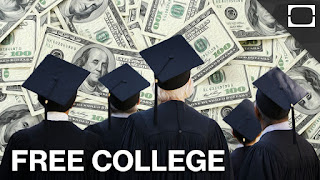 This piece was originally posted at The New Democrat: The New York Times: Room For Debate: Andrew P. Kelly- The Problem Is That Free College Isn't Free

I believe the main problem with many of these political debates has to do with language and how things are described. Whether it’s called free health care, free health insurance, free education, free college, free anything else that could be viewed as a positive thing that people should at least want to have. When the fact is none of these things are free for everyone if they’re provided by government. Because who funds government? Of course the taxpayers and anyone who pays taxes. You even now have Democratic Socialist presidential candidate Bernie Sanders saying tuition-free college when he talks about his college plan. Because he knows he’ll have to have new taxes in order to pay for his so-called free college plan.

Just replace the word free with affordable and apply affordable to every new service that you want government to provide for people and now you’ll be telling the truth when speaking to voters. Instead of giving voters impressions that you would be giving them all of this free government stuff, you’ll be treating them like adults and taxpayers. You tell them that you have a better deal for them with deal being the key word, because better of course would be debatable, because it would depend on the plan. And then tell them how you would pay for whatever you want to provide for them. Democratic Socialists like Bernie, Jill Stein and whoever else, would earn credibility with Joe and Jane Average taxpayer who are already paying a lot in taxes who know the government services that they’re currently receiving aren’t free.

So of course Bernie Sanders so-called tuition-free college funding plan, sure as hell won’t be free. At least not for anyone who pays taxes including payroll taxes. Bernie will say he’ll tax corporations and rich people to pay for his plan. But then those business’s will raise the costs of their customers, because they don’t want to see their cost of business to go up. Rich individuals will take their business and investments somewhere else where taxes aren’t as high. And Bernie might come back with passing some new law that outlaws business’s from raising their prices to cover their tuition-free college costs. But again those business’s will just take their business somewhere else where their cost of business isn’t as high. Every service anywhere that comes with a cost in creating that service also comes with a cost in providing that service to their customers. Why would government be any different?

Posted by Derik Schneider at 1:21 AM

Email ThisBlogThis!Share to TwitterShare to FacebookShare to Pinterest
Labels: Role of Government