The New York Times: Room For Debate: Can Diversity Survive Without Affirmative Action? 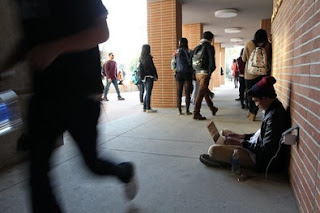 The New York Times: Room For Debate: Can Diversity Survive Without Affirmative Action?

You only achieve a colorblind, or racial-blind, which is what this is really about, or ethnic-blind, or gender-blind society, if you actually practice those things. And simply say dammit, (or use your own word) we are simply not going to tolerate people being denied things in America based on their race, ethnicity, color, gender and I would add sexuality. That’s why we have civil rights laws, to punish racist actions in this country that literally prevent people from succeeding in America. Of course all Americans are entitled to racist beliefs, or racist ideology in this country.

The First Amendment protects bigotry, but we simply do not have a constitutional right to practice those beliefs. In the name of hate, or for whatever reasons without any consequences coming for that. To use as a hypothetical, Joe could hate Tom because of his race. Whatever Tom’s race is and let’s say Joe and Tom are of different races. But Joe does not have the right to physically assault Tom because of Tom’s race. Or deny Tom a job, or a home for the same reasons. Just like Tom doesn’t have the right to deny Joe the same things or assault Joe based on Joe’s race.

And the same thing goes with government, that government can’t reward people, or deny people no matter their race, ethnicity or gender. Based on race, ethnicity or gender even if it’s only one factor. If the Equal Protection Clause means a damn thing. So my point is the way you stop racist actions is by enforcing the law and punishing people for when they do it. And you hit them hard enough that it hurts so they pay a steep price for it and even if they are bigots. The price for their bigotry might be so high that they may consider not doing it. That they’ll look for legitimate ways that are actually real to deny people who are of a different race, ethnicity, or gender. And they wouldn’t recruit people of different backgrounds to work for them.

The way you eliminate racist beliefs is simply through education. You educate the ignorant, so even if kids who have racist parents let’s say, you have them go to school and allow them to grow up with people from different backgrounds. So they can learn how foolish their parents are about other people. As I’ve said before you do not fight bigotry by practicing it yourself and you treat people as individuals. Not as members of groups and not assuming that someone from a certain background is going to need some special advantage. Just because of whatever group, or groups that they are members of. That the way to achieve diversity in America is through better education where everyone in the country has access to a quality education. No matter their race, ethnicity, or gender and no matter their income level, or their parents income-level. So we have as many Americans as possible regardless of race, ethnicity, or gender living up to their human potential.

Posted by Derik Schneider at 1:24 AM 0 comments