Warning! Too all of you sensitive viewers who are offended by cussing, you may want to close your eyes as you attempt to read this blog. Because it may have language inappropriate for your sensitive eyes and brain.

If fining people for what they say in public and I’m talking about what people say to each other, we obviously don’t have a constitutional right to threaten people, but that’s not what this is about, but what people say in public that’s not threatening especially when they are angry and have a right to be or are inpatient, if fining people for blowing off steam (to put it mildly) is not a violation of the First Amendment, the constitutional right to free speech, then the First Amendment is useless. And should be thrown out and we no longer live in a liberal democracy, but a police state.

Which perhaps some Americans would like us to be so we can become what we say we are against and get on other countries for being. Fines for foul language, perhaps they make sense on TV, especially for kids who don’t understand that language yet. And we don’t want them cussing out their parents and teachers and that sort of thing and hopefully vice-versa, all right. I can go along with that, but fining people for what they say on the streets, even when they aren’t cussing at anyone in particular, is fucking bullshit. And I already put out the warning so don’t get on me for that now.

For someone in my age range and generation, I don’t cuss very often. People now judge other people for how much they cuss. You’ll have a hard time finding a comedian under fifty today who doesn’t fucking cuss their ass off when performing and in general. They do it to sound cool and to be funny. For a lot of people cussing is a way of communication, that’s how they talk, you won’t find a hit fictional show on cable (and not just HBO) that doesn’t have a ton of cussing. A shit load even, (if you prefer) because they want their shows to sound cool.

And that’s how you communicate to young people today. For me cussing is a form of expression, I cuss to express anger, or amazement. Like, “holy shit that building is huge!” Or that guy is fat to use as examples. But I’m not one whose blown away by things like that very often and a pretty even-tempered guy and will say what the hell, or get the hell out of here, that sort of thing, instead of what the fuck. So when I do drop F or S Bombs, you know I meant it and not just trying to sound cool.

But just because I don’t fucking cuss my ass off on a regular basis, doesn’t mean I believe others should be fined when they do. Because that’s just plain God Damn Fucking Stupid! Is your life so fucking boring that you have to regulate what comes out of other people’s mouths, when they aren’t threatening, or libeling people, or yelling fire in a crowded place? Is your thumb so far of your fucking ass, you don’t have anything better to do with your time? And that pretty much sums up how I feel about this Massachusetts so-called public decency law.

Posted by Derik Schneider at 3:05 AM 0 comments 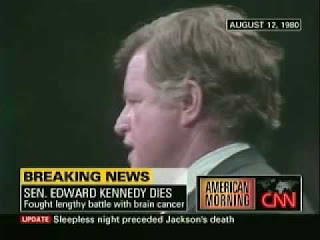 Had Democrats seen more of this during the primaries, may Ted Kennedy beats President Carter in 1980. You don't wait till the last speech of your presidential campaign to give your best speech. Especially after it's already been decided that you aren't going to win. Especially when you never figured out while you were running in the first place. Ted Kennedy, didn't want to be president. Not sure his family did either, but his supporters especially the Progressive Left in the Democratic Party, wanted him to run for president. That is why, plus the facts that President Jimmy Carter, was so unpopular politically and there was  a bad economy, a Democratic Congress, that Senator Ted Kennedy was obviously part of. Democrats were in serious trouble in 1980.

Looking back at it now, not sure if the Ted Kennedy presidential run hurt or helped President Carter. In a way it actually helped him, because the Democratic contest really got his reelection campaign going. And he just didn't beat Senator Kennedy in most of the primaries, but he trounced him. Teddy, didn't wain a major primary until March of 1980. But it hurt the President in the sense that now the party was divided between their Progressive Left and even George McGovern New-Left and their Center-Left. Their New Democratic Coalition that Jimmy Carter represented. Going up in the fall against a very united Republican Party that was all behind Ronald Reagan. And anxious to get back into power and win the White House back.

Posted by Derik Schneider at 12:33 AM 0 comments