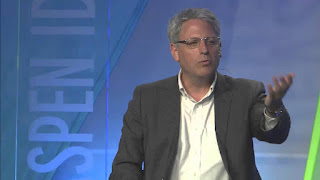 The job of analysts is to analyze what these facts mean and how they’ll effect whatever the issue is. For example a reporter would report lets say 120K jobs were created last month. And then the analyst, hopefully an economist or someone with a background in economics or business, will analyze what the jobs report means. Whether it’s a good sign for the economy or not. Or somewhere in between, what you get with NPR are reporters that have an ideological slant. People with progressive leanings who cover stories and report the facts that back up what they think about the story.

I’m not saying the NPR is the Fox News of the left, because with NPR you do get a lot of factually based info. You just don’t get most or all the info many times and you get the info that backs up how Progressives feel about these issues. Where except for a few exceptions with Fox News, you get the right-wing slant and a lot of right-wing commentary. The closest thing to Fox News from the left, would be MSNBC, but their audience is not nearly as big and they do have real reporters and anchors. Whereas Fox News except for Shep Smith and Chris Wallace, you have right-wing commentators playing the role of anchors and reporters.

And Fox News has essentially become the official mouthpiece of the Republican Party and right-wingers in America. But the difference being that Fox News is a private organization funded through advertising and the private sector. Whereas NPR is funded through tax revenue. If NPR wants to be a progressive mouthpiece when it comes to politics and current affairs and other issues they see as important, then they should be allowed to do that, but they should have to fund their own operations and business. Instead of taxpayers being forced to subsidize their progressive voice. And then we’ll truly see how much support there is out there for this type of media coverage.