RT: Video: American Prisons Exploding With Inmates: How This Has Happened

Its fairly simple why we have as large of a prison population as we do based on our own population and compared with the rest of the developed world. The biggest reason has to do with the War on Drugs, where again we treat drug addicts and users as criminals. Instead as patients or addicts or just dealing with narcotics in this country through regulation and taxation. But the War on Drugs is just part of it even though around 25% depending on where you look of our. Inmates are in prison for drug related offenses. The other issues have to do with the fact we treat all felonies and felons the same way. We send these offenders to prison for committing a felony when in a lot of cases we would be better off across the board. Sending non violent offenders to county jail or on supervise probation, that would involve doing their time. At a halfway house, working, paying the house rent and cost of living and doing community service. And even being back in school if necessary where they can get better skills and not have to create crimes in order to support themselves.

And another reason why we have so many people in the criminal justice system in America roughly two million people. Is that most of our inmates get released from prison, which is a good thing but they are released. Without the skills that they need to stay out of prison and be able to support themselves legally by working and producing. Not by committing crimes and profiting from that and if anything end up becoming better criminals while in prison. Because they spend most of their time not rehabilitating or simply building themselves up. A lot of times people who become criminals were never ready from the start to become productive people. And what they do in prison instead of positioning themselves to become productive people once they are. Released from prison is becoming better criminals and the only work or education they get while in prison. Besides learning how to be better criminals, is getting their GED or learning how to read or write. Mopping floors, doing laundry that sorta thing.

We could do a lot to bring down our prison population by simply ending the War on Drugs and regulating and taxing narcotics in America. As well as stop sending non violent offenders who don't represent a major threat to the economy. To prison but we also need to develop a pathway for productive citizenship for the offenders that we need to have in prison. And that gets to things like mandatory work and education, high school and college for the inmates. That can succeed in general population and put these people to work in prison which would also bring. Down the costs of our prison systems in this country.
Posted by Derik Schneider at 9:35 PM 0 comments

Imagine how successful an adult would be in life if they were low or Unskilled. Were not an athlete or an entertainer, didn't have a trust fund they could live off of or parents who could afford to take care of them. Didn't finish high or barely finished high school.

Imagine a country where we couldn't get around. Or could barely get around, unless we owned a boat or a helicopter or jet, imagine that in a country thats. Three thousand miles wide and about three thousand miles along which is what the East Coast of the United States is. An imagine and economy where the tax system would punish people for being successful and independent. Encourage people to be dependent and also encourages employers to be unsuccessful and send jobs oversees. And rewards companies for when they fail for being irresponsible. Now imagine and economy where we encourage foreign countries and companies to give us their energy and we pay them to. And we punish American companies when they produce energy in this country. Now the last one I promise, imagine an economy were students are forced to go to school based on where they live. Rather then what's the best school for them and where educators are paid based on how long they've been. Teaching instead of how good of a job they do teaching and schools are funded based on where they are located instead of what they need.

The economy I just imagined there is actually real and its located in the United States. Except for the infrastructure system, where by in large Americans are able to get around. But we behind our competitors including merging superpowers like China and Brazil. But the rest is completely true, you could have the best and most effective and generous public assistance system in the World. Without an infrastructure or education or energy system or tax system that promotes economic and jobs growth. As well as success, you are going to be a poor country if not third world country. Because you are not going to be able to create the jobs needed and even if you did, you won't have enough skilled workers to do. Those jobs, something that I'm afraid Progressive/Social Democrats who put so much faith in the state and centralize planning. Don't understand that there's a limit government can do for its people with our money. That the rest has to be done by the people with the resources to make it happen for us.

The economy I want for America is the opposite that I laid out in the second paragraph. A true Liberal economic system based on education, work, independence, infrastructure, energy. And a tax system that promotes all of those things and thats simply not what we have in this country. Which is why we are losing ground to the emerging economic powers when we simply don't have to. Because we are Americans surrounded by resources to do much better.
Posted by Derik Schneider at 8:26 PM 0 comments 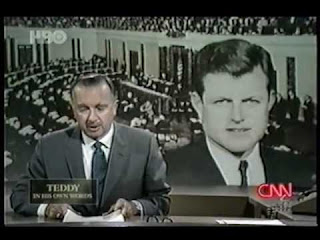 Despite this horrible tragedy, Ted Kennedy made a very successful and productive life for himself afterwords. Ted Kennedy, was basically still a frat boy in 1969 even at 37. He was married and already had kids, but wasn’t very serious about his marriage and liked other women. He was still dealing with the assassination of his brother Bobby and perhaps Jack as well. He simply wasn’t ready for the national spotlight and people to be looking at him as the future leader of the country. Because he was still trying to grow up, something that he didn’t really accomplish at all until the mid or late 1990s when he was already in his sixties with grandchildren. Up till then he was still trying to balance his personal life which could be chaotic and his professional life as a U.S. Senator.

If you watched the 2009 HBO documentary about Ted Kennedy which really was Senator Kennedy in his own words I really think you see how responsible and hurt he was from his own childish and immature actions that cost the life of a young women Mary Joe Kopechne. First of all, he’s driving this women home instead of his wife from this party. Which I believe is a big clue there. And driving her home when he’s had too much to drink. Ted, was still dealing with alcoholism in his early sixties. He drives the car into a lake and the first thing that comes to his mind is his personal survival. And the second thing his is professional survival. Not the women who was in the car with him. That came after it looked like he might be held personally responsible for her life.

Of the three Kennedy brothers that served in Congress and had successful careers in politics, Ted Kennedy had the best and longest career. Even though he was never president. But compare his Congressional record with his brothers and most people who have ever served in Congress in either the Senate or House and Senator Kennedy is in the first class, whatever you think of his politics. And all of this despite his lack of maturity and personal responsibility. He was never built to be President of the United States. By the time he was personally ready for that and to even make a strong run at that, he was in his early sixties. And Bill Clinton was already president and the Democratic Party was moving away from Senator Kennedy’s more social democratic politics. But Senator Kennedy, once he finally grew up became a great man and a great senator.

Posted by Derik Schneider at 12:37 AM 0 comments