GoleFFTV: Video: Robert F. Kennedy Jr: How To Save American Democracy: How to Expand Freedom to all of America

When you are talking about Democracy, you need to know that there are not just one type of Democracy. But several forms including a Liberal-Democracy which if you are familiar with this blog. You know thats what I support and what I write about and what I promote almost everyday that I post a new. Blog unless I'm writing about something that doesn't have much to do with Liberal-Democracy. Liberal-Democracy is basically the right of the individual to live in freedom as long as they aren't hurting or taking away someone else's freedom. Power to the people to use a term from the 1960s, including the power to vote and vote for anyone we want to whose running. For office at least in the general election, so to use as an example so called term limits and taking the power away from the people. To elect our own U.S. Senators the most powerful people in Congress that represent our entire states. Only the President of the United States has more power, that would be Un Liberal-Democratic. Then you have Majoritarian-Democracy, California case in point is a Majoritarian-Democracy. Where laws are written even by the people themselves and only need a majority vote to pass. And they can pretty much write anything into law, Liberal, Conservative, Libertarian, Socialist whatever laws they want.

Then you have Social-Democracy which is a form of Majoritarian-Democracy but in a Progressive-Socialist form. Where the Federal Government would have a lot more responsibility to make sure that all Americans would be taken care of. And where the people would have less responsibility over their own lives from an economic as well as personal point of view. To govern our own lives because we would have this Collectivist-State to protect us from even ourselves. So its not just a matter of whether you support Democracy or not and hopefully you do at least from my. Perspective but what type of Democracy that you are talking about and what type of Democracy you are in favor of. And like I said what I want to do is to protect the current Liberal-Democracy that the United States has for the most part. But to expand it to the rest of the country, so when I see proposals from the Far-Right or Far-Left that would weaken our individual-freedom. To make our own decisions with our own lives, as long as we aren't hurting other individuals freedom. I write a post against that and why I'm against it.

As I blogged last Friday in satiric form I'll admit but my point was a serious one. You want to expand freedom to all Americas, then you have to contract ignorance. Educating the entire public to contract and at some point perhaps we could eliminate ignorance. So Gays, minorities and even majorities where we now have bigotry towards European-Americans from the Far-Left in this. Country and where immigrants aren't seen as invaders, non Christians from the Far-Right as well as Christians aren't seen as terrorists by the Far-Left. Where Gays aren't seen as immoral because they are attracted to the same gender. Its simple you contract ignorance in this country with a better education system and where people have the education to not only be independent. And be able to take care of themselves but now have the knowledge to see that people just because they have a different. Religious or racial or ethnic or national or sexual background. Aren't bad people because they are different from us and in most cases are good people like us. But just different and we would see less proposals in this country that would weaken our freedom. Because Americans would simply know better.

You want to talk about money as far as expanding Liberal-Democracy to everyone. Fine but its not money I want to eliminate from politics but its dark-money, campaign funds that we simply do. Not know about because the givers of that money are too embarrassed to let the public know about those contributions that were given out. So what I want is full disclosure in American-politics then again let the people decide whose worth representing them and whose not. Along with universal education for all and no more drifting towards a Socialist or Theocratic-State. That would see individual-freedom as a threat to the country but would embrace it. And then we would really have a Liberal-Democracy that works for everyone.
Posted by Derik Schneider at 11:48 PM 0 comments 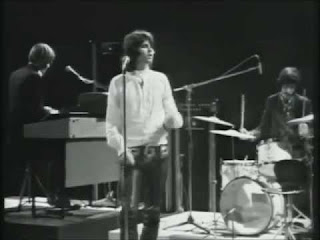 I’m thinking the cameraman, or perhaps the camerawomen, really liked Jim Morrison and was really attracted to him. Because in the first two minutes of this show alone, you see several closeups on Jim Morrison’s leather legs and leather suit, sitting on the stool with his legs sticking out in his skin-tight black leather jeans and black leather jacket, with his concho belt. It has been said that Morrison, wore the skin-tight leather pants, leather jeans really, with the concho belt, because he wanted to highlight his crotch. Which makes a hell of a lot of sense, because if you watch this show, or Live at The Hollywood Bowl, or The Doors in Copenhagen, or The Doors in London, The Doors on Ed Sullivan, just to use as examples, there are several closeups upfront of Morrison in his leather suit and right on his legs, butt and crotch. I mean if you’re actually attracted to the man, watching all of this footage is a great way to see him.

As far as this show, I think it’s The Lizard King as it his best. Just wish this show was in color and since it was done in 1968, that would’ve been a fairly easy thing to do. But with Morrison, you get great vocals and his role-playing and acting and moving around and the dancing. And Ray Manzarek, if anything who had a better singing voice than Morrison, at least singing blues, doing a great job on the keyboards. When The Music is Over, and Love Me Two Times, I think are their best songs in this show. Love Me Two Times, comes with a great music video as well. And you have Morrison going off the cuff and doing a little story telling as well. And they finish with, well The End, what else. Which is their great war song, even though it wasn’t written directly for the Vietnam War. But considering this was 1968, the timing of this song was simply perfect.

As what can be said about a lot of The Doors performances, I just wish they were shot in color. Which is one reason why Oliver Stone’s version of The Doors, whatever you think of the movie, is actually very important. Because it gives you a very good idea of what The Lizard King was like in color. Even with Val Kilmer, being a much larger and taller man than Jim Morrison. But it would be nice to see a colorized version of a lot of these performances. But the sound of these performances and how Morrison sounded and how the band played, is very good, even in black and white. Which doesn’t affect the sound of these shows. But the shows would’ve been better had they been done in color. Like with The Hollywood Bowl, Ed Sullivan, Smothers Brothers, Jonathan Winters. And maybe a colorized version of this show, will be available at some point.

Posted by Derik Schneider at 1:50 AM 0 comments