AlterNet: Opinion: Glenn Greenwald: "How Can Anyone Still Believe That America Is the Greatest Country on Earth?": Why America is Worth Defending and Celebrating

Glenn Greenwald: How Can Anyone Still Believe That America Is the Greatest Country on Earth? | Alternet

Actually I'm not sure if I'm going to put this blog on satiric form or not or make it a serious but hopefully enlightening informative intelligent piece. And yes those blogs actually exist and not just written by me. I guess I'll just throw a bunch of thoughts together and see how it ends up, sorta how I make soup for anyone familiar with my cooking if you want to call that cooking. But first point if America is somehow this regressive, nationalistic, racist and otherwise bigoted country. Except for of course towards the majority of the country where bigotry is okay with the New-Left in America. Where we are all slaves to the man whoever that guy is and slaves to Capitalism and so fourth. Why the hell does 320M people live here when we all for the most part have the freedom to live in another country. If Canada is so much better then America, why do we have ten times as many people as they do. Why is our economy ten times as big, why do they rely on us for their defense as part of NATO instead of the. Other way around like the rest of Europe does all countries that are developed countries.

Why do Canadians and Europeans still immigrate to America instead of the other way around. Why do millions of Americans from as far away as Korea immigrate to America when they could go to Europe or Australia or. Canada and so fourth, why don't these so called Progressives immigrate from. America to Europe or Canada and live in what they see as Progressive and human countries that America. Apparently isn't, why live in a country that you think is a terrorist state when you don't have to. Feel free to answer any of those questions and send me your answers. Because as much as Progressive like say how bad America is, they've benefited from everything good that America has to offer. Including for the opportunity for people who start from basically nothing to make a good life for themselves.

There is no other country in the World where Africans, Latinos, Asians, Arabs, Jews, Europeans at least not a country as large as the. United States where the living standards as are high as they are in America but thats not what you hear from Progressives who don't like America. Because we aren't as Socialist and as dovish as they are, so somehow this makes us bad. Or selfish that we don't care about other people and so fourth. Thats the current language of what I call the New-Left in America.  I'm not saying America is perfect is you read my blog on a regular basis, you know I don't believe it is. But we still represent the best shot for freedom and opportunity and tolerance better then any other country in the. World with a population as diverse and large as ours and thats what separates us from the rest of the World. 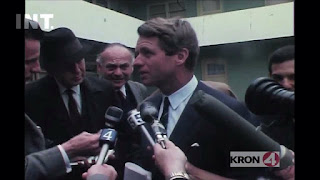 This video is the exact reason why I wish former U.S. Senator Paul Wellstone was still alive. And had he lived I believe he not only would’ve been reelected to the Senate, but would’ve pushed what Senator Robert F. Kennedy and Dr. Martin L. King called the Poor People’s Campaign and tour from the late 1960s. But Senator Wellstone would’ve started this campaign the 21st Century once he returned to the U.S. Senate. And back to the next Congress he would’ve served in 2003-04 that he had already started pushing while he was still alive.

Because not many people were talking about poverty in America back then at least not many public officials at the Federal level. And not many public people who were at, or near the height of Martin King were talking about. Poverty and yes that it actually existed back then in a country that was then and now the richest country in the World. And yet we have 1-5 or 1-4 then Americans living in poverty. In Appalachia, the Delta in Mississippi, inner-city ghettos like in big cities like Detroit and Los Angeles, Baltimore and so-forth. That how can a country that’s as rich as ours have so many people who don’t have enough to live a good life.

Another thing that I respect about Senator Kennedy’s campaign was that it came right after the so-called War on Poverty was announced by President Lyndon Johnson. Because that so-called war really didn’t go far enough and I’m not talking about money. But what Senator Kennedy was looking at were not only the what people in poverty go through and their living conditions, but also how to help these people move out of poverty and make a good life for themselves. Where the so-called War on Poverty was more about how to do we prevent these people from starving. Going homeless, without clothes and healthcare and so-forth.

The War on Poverty, didn’t take the next step and building off of a system that prevents people from essentially dying. But how we do we empower them so they don’t have to live in poverty at all. Which I believe had Bobby Kennedy had lived, we would’ve seen those ideas come from him later on. This is just one example of why RFK’s assassination was so tragic, because of the attention and the focus to these issues he would’ve brought. And why we need people with that type of power to focus people on these issues today since we are still dealing with the same issues. That we were talking about as a country forty-five years ago. And be able to finally focus on how we actually solve these problems. Instead of just talking about them.

Posted by Derik Schneider at 12:00 AM 0 comments