RT: The Big Picture With Thom Hartmann: Ben Beachy- The New Left and The TPP 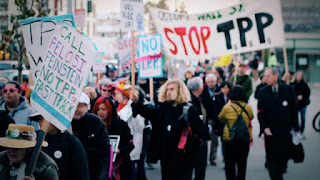 This piece was originally posted at FRS FreeStates on WordPress: RT: The Big Picture With Thom Hartmann: Ben Beachy- The New Left and The TPP

Pretty good example of how American organize labor which is part of the New-Left in America, perhaps are Democrats in name only. Ideologically only perhaps small-d democrats. People who want a political voice in a major Left political party. But ideologically a lot more comfortable in the Green Party. Free trade, is a perfect example of this, where you might have better luck finding a super obese supermodel, than a Socialist who supports an international free trade agreement.

The Democratic Party is now so big and inclusive, that we now have Democratic Socialists in big northern and western cities and Blue Dog fiscal conservative, socially moderate Democrats in the South. As well as Center-Left Liberal and Progressive Democrats, all over the country. That they no longer need organize labor to raise money. Because of their interests in Hollywood and liberal business groups.