The Nation: Blog: Alex Luhn: 50,000 March in Moscow After The Killing of Opposition Leader Boris Nemtsov 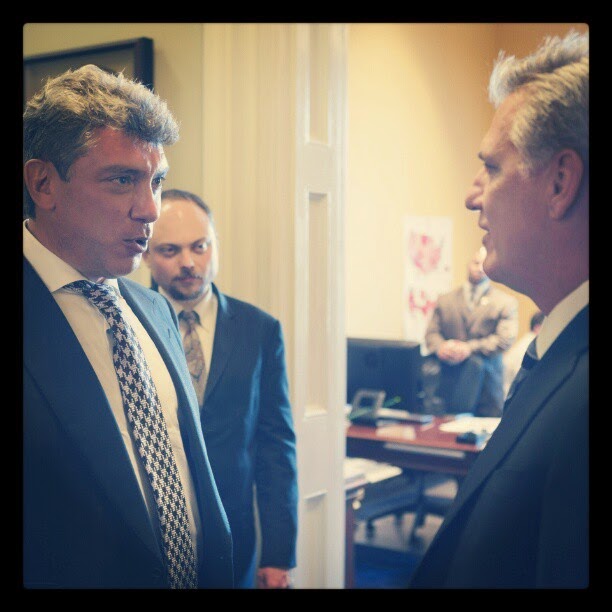 The Nation: Blog: Alex Luhn: 50,000 March in Moscow After the Killing of Opposition Leader Boris Nemtsov

I don’t know enough about the Russian opposition or Russian opposition parties to say that there’s anything looking like a real democratic opposition there that looks liberal or social democratic or even center-right, but not as far to the right as Vladimir Putin. But the fact that the Putin Administration assuming their security forces took out Boris Nemstov one of the opposition leaders in Russia, tells me at least that there is a democratic opposition there at least of some sort. Otherwise why kills someone who isn’t that big of a threat to you. Who isn’t famous that won’t bring any attention to your administration.

As a Liberal Democrat myself I would love to see a real liberal democratic opposition in Russia. Something that looks like what Venezuela has that may at some point with the continued collapsing of the Venezuelan economy under anti-democratic socialist control be able to take over that country from the anti-democratic socialist Maduro Regime there. I would love to see Russians taking to the streets and demanding to not have their country back, but have it in the first place. That builds a free society where all Russian citizens regardless of ethnicity and gender can succeed there. It is a country with an incredible amount of potential in people and resources.

America and Europe can help Russia develop their democratic opposition where it is liberal, conservative, social democratic or where three movements develop that are strong enough to take on Vlad Putin’s neoconservative United Russia Party. The Putin Administration doesn’t believe in democracy certainly not liberal democracy and a free society where the Russian people would elect their own leaders and decide for themselves who represents them in Parliament and who is the President. Through federal elections that are free and open and where one party isn’t essentially guaranteed a large amount of power every time a so-called election is held.

Right now what America and Europe are doing to Russia as far as the Putin Administration is containing their military through economic sanctions. So Russia pays a heavy price for their invasion of Ukraine and any future invasion they may attempt. But these sanctions hurt the Russian people first who aren’t do very well under Putin because of his mis-management of the Russian economy. But things like communication and giving the Russian opposition a voice inside of their economy with things like Voice of America would empower the democratic opposition to take on their government through political means.

Posted by Derik Schneider at 1:01 AM 0 comments