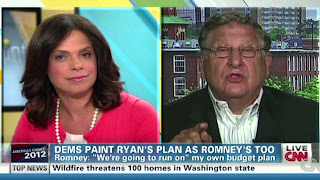 If you’ve followed the career of CNN anchor Soledad O’Brien who’s also worked at NBC News and I’m sure other places and you don’t look at it from left, or right, but you judge her career instead, especially if you look at her documentaries and panel discussions, its, pretty clear she comes at her job from a political viewpoint. The whole series Black and Brown in America is a good example of that. I’m not saying she’s not qualified, or doesn’t do a good job, but she approaches issues from the left and would probably be better suited for being on MSNBC than CNN.

Soledad, could be the Bill O’Reilly of NBC News, who takes on people in power from both sides, but also has an ideological viewpoint. That she’s not afraid to make public, but goes after people on both sides. To give you an example of Bill O’Reilly. Back in the summer of 2003, when it was discovered that there wasn’t any weapons of mass destruction in Iraq and we went to war there, based on bogus evidence to put it nicely, O’Reilly announced he was done with President Bush.

O’Reilly announced he was done with President Bush and was no longer going to carry his water for him. He goes after people on both sides, but is definitely a right-winger himself, but not a puppet. Well Soledad O’Brien could be that watchdog for the left and even take on leftists. When she feels she should, which I’m sure he has in the past. She could be Mike Wallace, or Ted Koppel of CNN. Someone who goes after people in power. Not to bring people down, but to hold them accountable and make them back up their argument and policies, or pay a price for it.

As far as Soledad O’Brien’s interview with John Sununu Sr. President H.W. Bush’s Chief of Staff, as well as former Governor of New Hampshire, I think she did a good job. Politicians don’t like to be asked anything that could put them on the defensive and get them off of their talking points. When they do interviews like this, they see their role as speaking up for the candidates they support and speaking out against the candidates they oppose. And anything that’s a tough question which is what anchors get paid to do if they are news anchors which is what Soledad is.

Good anchors put politicians on the defensive when they feel they need to, so what they do instead of answering the questions, is to respond by taking it out on the anchor. For example, ‘how can you ask me that question, when we should be talking about Joe Jones horrible foreign policy. And my candidate’s great record at creating jobs and balancing budgets, or whatever.’ Soledad was quoting off of Mitt Romney’s website and wanted a response from Governor Sununu about it.

Is there a leftist bias in the media whether it’s liberal or progressive, of course there is. Just like there’s a rightist bias in the media as well coming from Neoconservatives. Which is why people who are interested in the news, shouldn’t put all of their eggs in one basket (so to speak) when it comes to gathering their news. And if you are a regular viewer of MSNBC or FNC, I suggest you checkout other news networks, so you can get all the truth, instead of part of it.

Posted by Derik Schneider at 2:11 AM 0 comments