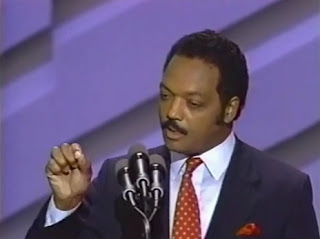 Reverend Jesse Jackson at least to me with all of his faults and strengths represents the best of the Democratic Party as far as our vision and what it means to be a Democrat in America. And what we stand for as a party and what makes us Democrats. Not all of the policies, but the vision and what Democrats are supposed to be about and what we fight for. He’s someone who started from the bottom in life growing up in the segregated deep South of the 1950s and 60s.

Hope, opportunity, equality, do not settle for mediocrity and bigotry, or use the way you started out in life as an excuse not to be successful which is I believe the message of Reverend Jackson that America should work for all Americans. Which is what the Democratic Party is all about at our best and why we represent the entire country. Instead of just being able to appeal strongly to one ethnic or racial group in the country and why we have strong Democrats all over the country.

An example of why one of our most successful president’s, comes from one of the most reddest states in the union where he served as Governor for twelve years before becoming President of the United States in 1993. And who had a similar message as Reverend Jackson, but perhaps phrased it differently. “That there’s nothing wrong with America that can’t be fixed with what is right with America.” From President Bill Clinton’s 1993 inaugural address.

The Democratic Party had a major contender for the presidential nomination in 1984 and 1988. Whose an African-American from the deep South, to twenty years later we have an African-American President of the United States. Whose message is also similar to that of Reverend Jess Jackson. Of hope, opportunity and responsibility who are about that. Being an American Patriot is not saying things are always perfect, but always working to make things perfect. Knowing you’ll probably never accomplish that to make your country as perfect as it can be. Hope, opportunity, execution of those opportunities is the message of this speech.

Posted by Derik Schneider at 1:34 AM 0 comments