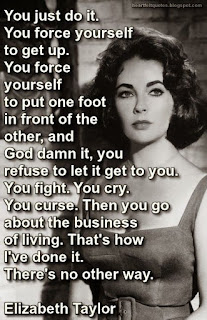 I think one of the reasons why Elizabeth Taylor was such a great survivor, was because she had a great sense of humor. I would have paid anything to hear her private conversations with Richard Burton. Who could be a Little Dick (ha, ha) when talking to Liz. I think listening to them talk to each other would be like being at a great two-person comedy show. Like watching the Rat Pack, Abbott and Costello, only funnier. If you’re familiar with the movie Whose Afraid of Virginia Woolf? (That is not a question, but a movie) It is one of the most dramatic movies you’ll ever see. But Liz and Richard turn it into a comedy, because a lot as far as how the couple communicates with each other in that movie, is how Burton and Liz, communicated in real-life.

Without her sense of humor, I don’t think Liz makes it to 79. I mean think about all the bullshit she went through in real-life and that is not talking about her movies, but her own life. I mean boredom alone could have killed her when she was married to Senator John Warner when they were married in the late 1970s and early 80s. She loses husband Michael Todd, to a plane crash. She survives what seven divorces, but manages to hang on to all her wealth that she earned after each divorce. She survives cancer and again makes a better life for herself afterwords. She is sort of the Bill Clinton Hollywood. She shoots one of her toes off, but grows a bigger healthier toe after losing the original toe. You don’t live the life that she did without being able to make fun of people effectively. Especially yourself and all of your screw ups.

As far as Liz’s advice on life, that is the roadmap she lived by to get through her 79 years. What choice do you have when you’re consistently knocked down. Especially from walking into doors, because you’re not paying attention. You either first realize how stupid you were, or how badly someone screwed you and either learn from your mistakes and get back up, or you lay down and claim life is not fair and wait to die. It is not a question of whether someone gets knocked down in life, or not. And getting knocked down in life by itself is not a bad thing. Getting knocked down in life is a reminder that you’re not perfect and you’re only human which is all you should want to be anyway. It’s the aftermath that is key. Do you learn from experience and adjust appropriately and get back up as a better person. Or do you just stay on the ground and rot away.

Liz Taylor’s message on life, was one foot forward after another. Figure out where you’re going and then ultimately get there. You’re going to take wrong turns at some point as we all do, but the key is to recognize them and then correct your course as a better person. Not lie on the floor and bitch about how unfair life is, or yell at your GPS for giving you wrong directions. But instead figure out what is not working especially your own mistakes and fix the issues and move forward. Get to wherever which is the best place for you. Knowing you’re going to screw up again, but the more you learn about yourself and where you come up short, the better you’ll be able correct your own shortcomings. And make fewer mistakes in the future.