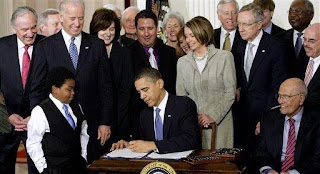 Fareed Zakaria who’s a foreign affairs analyst for CNN. But who also host a Sunday talk show, Global Public Square. That does cover a lot of issues that relate to foreign affairs. But who’s show covers other issues. And who’s someone I respect a lot, hosted a documentary last Sunday night. A week ago from yesterday about healthcare reform. Healthcare in America and Healthcare around the World. Looking at what we do and what other countries do as well in healthcare. Was asked by Wolf Blitzer a couple of weeks ago, right before his documentary aired on CNN. Whether he believes the Affordable Care Act is constitutional or not. Which Mr. Zakaria replied, “I don’t know that’s above my pay grade”. But that its essential to Healthcare Reform whether its constitutional or not. For us to be able to bring down our healthcare costs. Which is my position and I’ll explain why.

Posted by Derik Schneider at 1:18 AM 0 comments