"The Good & The Bad About The Supreme Court ACA Ruling": Where Progressives Lose On The Commerce Clause 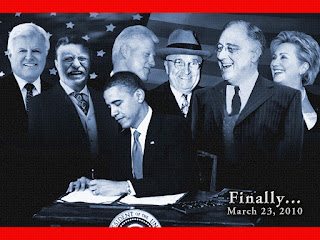 To get to the Commerce Clause, bad news for Progressives and good news for everyone else, where they believe the Affordable Care Act is Constitutional or not. Because the Supreme Court ruled that the ACA is not Constitutional based on the Commerce Clause, which is the argument that Progressives. Going back to the FDR Administration have always used to grant the Federal Government power into the economy, to create the Federal Safety Net and to expand it under the LBJ Administration. The ACA was ruled Constitutional based on the Taxing Power of the Federal Government, which was added to the US Constitution back in 1917 or 1918, sometimes I wish I was a lawyer. Which means that Progressives in the future are going to have a hell of a time passing their Big Government agenda, all of the new Social Insurance Programs. I'm sure they would want to add to the Federal Government. They are going to have to find another way.

Great news for Liberal Democrats because we've shown that we can get damn close to Universal Health Insurance. Without taking away Americans choice in how they get their Health Insurance and as I've said before, the ACA is just a beginning. Hopefully we'll have a Public Option in the future but Medicare For All, looks dead right now, unless you get a Progressive in the White House with a Progressive Congress. That has large majorities in both the House and Senate.
Posted by Derik Schneider at 9:54 PM 0 comments