Great news for anyone who wants the Assad Regime to be defeated in Syria, this will bring in more support. For the Syrian Rebels, because now Europe and America will know who they are dealing with and what they want.
Posted by Derik Schneider at 8:02 PM 0 comments

The Daily Beast: Howard Kurtz and Bill Hemmer- The Next Four Years at Fox News 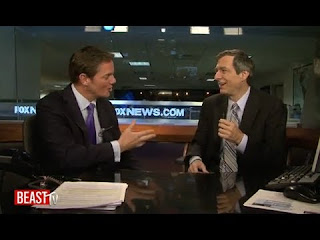 This piece was originally posted at FRS Daily Journal: The Daily Beast: Howard Kurtz and Bill Hemmer- The Next Four Years at Fox News

The next four years at Fox News will hopefully start with a revaluation of how the report the news. Because how they’re doing it now, is not helping and informing the people who they speak for. Which are right-wing Tea Party Republicans and the Far-Right in America. Even if because Republicans actually believe a lot of the, lets call it spin that comes from FNC and take it seriously and many times it’s just half-truths if that, which leaves a lot of Republicans, especially the professionals who either are politicians themselves or work for politicians, with at best half of the news. As we saw with the polling of the Romney-Obama election.

Where in the last few days only FNC thought that Mitt Romney was going to win, or even had a good shot at winning. Where the rest of the mainstream media saw a clear bounce or bump in the favor of President Obama. Especially in states like Florida and Virginia, over the weekend with Ohio never moving towards Governor Romney either. It’s fine and I’m even for a news organization having their commentary that clearly leans in one direction or the other, I’m not getting on FNC for that, but what they need to do if they want to get taken seriously and be considered a credible source for news outside of the Republican Party, is separate news from commentary. Like The Wall Street Journal.

It’s fine a way to separate the news from the commentary. Take Sheppard Smith’s lead on this who actually has a real newscast, the FOX Report. Just report the news no matter who it hurts, or helps and then have your commentators explain what they think it means. As well as bringing in more inform commentators. Not relying so much on the Dick Morris’s and Karl Rove’s of the world. Who are really just there to speak for their side of the aisle, but bring in people who actually know what they are talking about. When you bring them in to talk about the issues. Which CNN does with Republicans consultant Alex Castollanos.

Posted by Derik Schneider at 1:37 AM 0 comments