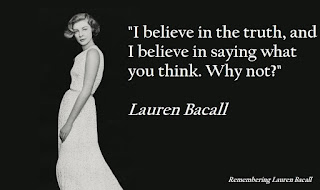 Hollywood Goddess Lauren Bacall saying that she believes in the truth and saying what you think. And adds why not? And to make a political correctness point to that even though of course I agree with Lauren on this, whose at least arguably the greatest actress we’ve ever known even though this is not about her career. Political correctness advocates Left and Right and unfortunately more Left than Right would argue that sometimes the truth hurts. And we can’t always say what we think and know, because someone especially perhaps minorities might be offended by that. Which of course goes against liberal democratic values like fee speech. But that is really a different topic and this blog covers that a lot anyway.

The best tool that an individual has in life will ever have after life is not freedom. And that might sound surprising to some, but there’s actually something more important than that. That has everything that we all value and love built around this more powerful tool. That tool is the truth and without that and of course education which comes from the truth, nothing else matters. Without the truth and education we would never know what we actually know. You’ll never know how to improve yourself and where you do well and where you need to do better without the truth. And sometime you might have flaws that are so severe and screw up so badly that you need someone to get in your face and set yourself straight. (No offense to gays) The truth also helps you know where you’re doing well. So you can continue to do that as you’re improving on your flaws.

We’re nothing in a positive sense if we don’t have the truth and we don’t have an education. To know what’s going on and why it’s going on, to know what works and what doesn’t work, where we’re strong and where we’re weak, where we’re average. And then know to improve ourselves and emphasize our strengths. And yes that at times means hearing things about yourself and people you care about that are pretty negative. But the smart strong people can handle that, because they know themselves very well, because they value the truth and facts and rely on them to improve themselves. They know they’re not perfect and that there are times they need to be reminded of that and to see where else they may come up short. And there are times when the truth sounds real good. And you find out something good about yourself that you didn’t know before. But without the truth we would all be blind NASCAR drivers on the racetrack of life, hoping we get to where we need to go safely. But without a course that actually gets us there.

Posted by Derik Schneider at 6:38 AM 0 comments