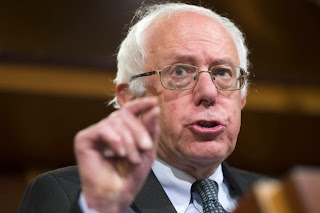 I’m glad Senator Bernie Sanders, the only self-described Socialist member of Congress, but not the only Socialist in Congress, which I’ll get to later, is running for President in 2016. Not because I as a center-left New Democrat Liberal would vote for him, at least in the Democratic primary. Because I wouldn’t, I’m voting for Martin O’Malley who better represents my center-left politics. But because now Socialists will have a major party presidential candidate who calls them self a Socialist. And center-left Liberals will no longer have to hear someone like Dennis Kucinich whose just as far-left as Senator Sanders calling them self a Liberal, when they are Socialists.

Far-Leftists in America, who prefer to be called Progressives, even though they are way to the left of Franklin Roosevelt, Harry Truman, Lyndon Johnson, on foreign policy and national security at least, but economic policy as well, or Liberals, even though they are much further to the left of Jack Kennedy on both economic and foreign policy, as well as national security, will now be able to come out in favor of Bernie Sanders and his socialism. Because they believe in the same things. Higher taxes on everyone, small military, bigger more centralized Federal Government, the U.S. Government becoming responsible for the economic and personal welfare for all Americans. And providing most if not all of our basic necessities in life. While having a large enough private sector to have an economy strong enough to finance all of these Federal social services.

Social democratic publications like The Nation, AlterNet, Salon, TruthOut, TruthDig, The New New Republic and others and social democratic groups like The Daily Kos, Media Matters, MoveOn and many others, the Green Party, Democratic Socialists of America, will now not only have their presidential candidate, but a presidential candidate who quite frankly has the balls to self-describe his politics and ideology for what they are. Which is democratic socialist. Senator Sanders, like all Democratic Socialists, believes the role of government is to see that everyone is taken care. That everyone’s basic needs are met. Especially for people who aren’t able to take care of themselves, to take care of them. Even if that means less individual freedom for everyone else.

So you’ll have at least one Liberal in Martin O’Malley and perhaps Hillary Clinton, depending on how she runs for President, saying that what America needs is more opportunity. And for freedom for everyone to be able to succeed in America. And that government has a responsibility to see that everyone can get themselves the tools to be able to live in freedom. Built around education, infrastructure, economic development for struggling communities. Assistance for people on Welfare to be able to get themselves a good job and live freely. With the lone Democratic Socialist running for President in the Democratic Party, representing the Far-Left flank saying that what the country really needs is a government big enough to take care of everyone. Which should make the Democratic primaries interesting.