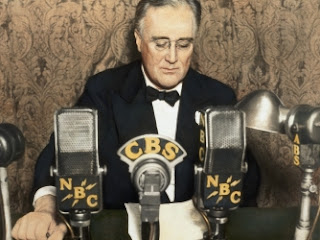 The fact that President Franklin Roosevelt was speaking about a recession in America in 1938, is pretty good evidence that five years after becoming President of the United States, that we were still not out of the Great Depression yet. The economy was getting better, but we slipped back into recession in 1936 or 37. We were still looking 20-25% official unemployment. Maybe half of the country living in poverty. By the time the United States got involved in World War II in 1941-42, we were still dealing with the Depression, Recession and high unemployment. And it was really World War II that moved the country to full-recovery from the Great Depression. With all the money that was spent financing our involvement in that War.

What the New Deal deserves credit for, is establishing a public safety net for the country to could turn to, when they are unemployed. Or don’t have a large enough retirement account, to protect people’s savings in banks. And the New Deal did put some unemployed workers back to work through infrastructure investment. But the Great Depression was so deep which is why it was labeled the Great Depression. With so many people losing all of their money and jobs at the same time. With so many banks and business’s all failing at once. What the New Deal did was help sustain the country through the Great Depression. So things couldn’t get worse, but it didn’t bring us out of it.

It was World War II that brought the United States out of the Great Depression. And back to prosperity and an economic power, as well as a world power. Where we’ve remained ever since. With the millions of people it employed, either in the Defense Department, or working with private contractors that did business with DOD. Making all of our equipment and the American auto industry did very well during World War II making all of those tanks And President Roosevelt deserves a lot of credit for this as well. The New Deal, served as a buffer from the Great Depression. Put in the floor that the American economy could cash on and buy it time to recover. But it didn’t get us out of it and back to full-recovery.

Posted by Derik Schneider at 2:05 AM 0 comments