I don't like the term Full Employment, its a Progressive Utopian term, bogus even that would suggest that any available worker whose not retired. Has a job, we've never accomplished that, for the simple reason that everyday people are gaining jobs, others are losing there's. From either being laid off or getting fired because of cause but what we can have is an Economic System, thats still Capitalist, Liberal Capitalist even which is what I would prefer. Where most if not all the well educated workers in the country are working and have good jobs and the workers who are not working. They are either retraining or educating themselves so they can get a good job and even where we as a country are helping them get a good job. We got real close to that as late as 2000 and have slipping ever since under two different administrations. And thats what we should be moving back to, which is something I believe President Obama understands and will be pushing for if reelected. But is one reason why the 2009 American Recovery Act is so disappointing, because he had that opportunity, with low Interest Rates, where we could've borrowed around 2T$. And spent all of that money rebuilding the United States and passing Tax Cuts that would've encouraged Consumer Spending and Economic Growth.

To me as a Liberal Democrat, true Economic Freedom, is about the ability for individuals to be able to get themselves a good education. Work hard and be successful educating themselves and them with the ability to go get themselves a good job, based on the skills that they've obtained for themselves. Or even open up their own business and really have Economic Freedom, where their economic success in life, is based on how well they do in business. Doesn't mean someone has to work in business or own their own business to be economically successful. Just as along as they have the Economic Freedom to be able to do and then be financially rewarded based on how well they do. How productive they are and pay taxes based on what they can afford to pay. But not to the point where it discourages them from being productive in life. And then where people who have fallen are able to prepare themselves to go back to work and get help finding another job.

Workers obviously don't have to be in business to be successful in life, they can be successful as Public Servants or working for Non Profits. Just as long as they have the ability to decide for themselves what course they chart in life, where government is not holding them down through high taxes and regulations. And not trying to take care of them with their own money but where they are able to make those decisions for themselves.
Posted by Derik Schneider at 8:31 PM 0 comments 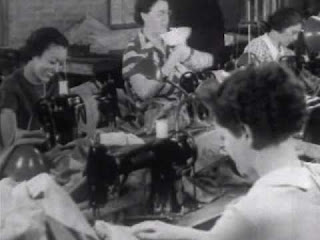 The New Deal I believe has a mixed bag when it comes to the Great Depression as far as how it dealt with the Depression. Social Security and the minimum wage and perhaps a few other things like the Federal Deposit Insurance Corporation, have all been success’. But the American economy ten years into the Depression which stared in 1931, or so and again the Depression took up most of Franklin Roosevelt’s first two terms as President, the economy was still in fairly weak shape. A lot of what you probably see in this video is probably true, but they’re not going to give you the whole story. Americans went back to work during the 1930s, but a lot of other Americans were still out of work. Or not making the money that they use to and perhaps now working part-time.

If you look at the American economy in the 1930s and then go up to the 1940s, there’s no comparison. The 1930s, America is either in depression, or recession most of if not the whole decade. And was looking at unemployment levels of twenty-percent or more. The 1940s, thanks to World War II and I’m sure some government infrastructure investment, is where you see Americans go back to work and working good jobs. The 1940s and World War II, were huge economic booms for the American auto industry and the American military industry. All of those vehicles and equipment that was needed to fight World War II in Europe and Japan. And you obviously need good workers to build those vehicles and that equipment. And that is where the jobs are created.

Of course any government propaganda video is going to show you the highlights of what the current administration is working on and show their success’. So this film isn’t any different in that way. Which is why people need to know the difference between the whole truth and propaganda and do their own research. Not that government will lie to you necessarily of course, at least not all the time even though the best administration’s do lie, but they’re not going to tell you the whole story. But what they want you to hear, which is really the definition of propaganda. So what you need to do is find out the rest of the story and then be able to judge for yourself what is really going on. And how bad or good it actually is.

Posted by Derik Schneider at 2:05 AM 0 comments