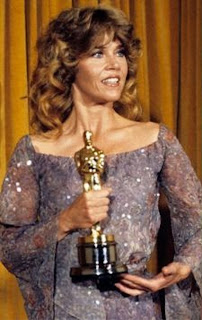 This piece was originally posted at The Daily Review: Marmar: Jane Fonda interview With Barbara Walters in 1978

Jane Fonda, I believe giving Barbara Walters an interesting interview in 1978. Whatever you think about her politics she’s very honest and open about them and her life as well. Like losing her mother at the age of 12, her somewhat distant relationship with her father Henry Fonda. Her political activism in and outside of the Democratic Party and I could go on. I believe that is what people like her whether they like her or not they at least respect her realness. And that there really isn’t anything fake about her. And as a result the characters that she plays in her movies come off as so real as well. California Suite, where she plays a somewhat cold and distant mother, is a perfect example of that.

Whatever you think of Jane’s politics I think even her strongest opponents will give her that she’s a great actress. Perhaps would prefer her to stick with acting and leave political activism to people who know more about the issues that she campaigns on. But she’s a great actress and I at least believe if there wasn’t an actress named Elizabeth Taylor, I believe we’re talking about the greatest actress at least of the Silent Generation. And that includes women like Sophia Loren, Angie Dickinson, Kim Novak, Karen Black, to use as examples. When it coms to acting she’s in the same class as Liz Taylor, Lauren Bacall, Ava Gardner, Rita Hayworth, Susan Hayward and many other great actress’s. And that should never be misunderstood and forgotten about Jane Fonda. Regardless of what you think about her politics.

Posted by Derik Schneider at 2:06 AM 0 comments