TIME: Josh Sanburn- California Corrections: How a State Picks Thousands of Inmates to Take Out of Prison 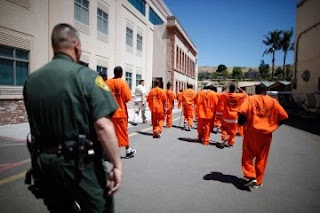 This piece was originally posted at FRS FreeStates on WordPress: TIME: Josh Sanburn- California Corrections: How a State Picks Thousands of Inmates to Take Out of Prison

This is how to deal with prison overcrowding in California and the rest of the United States as well. And now to prevent future prison overcrowding by stop treating every offender as someone who has to be in prison for their crimes. And start taking advantage of the other services that we have for now-violent offenders. And start with the War on Drugs like ending it would be a great start. Meaning we would no longer send people to prison who are convicted of using illegal narcotics or possessing those drugs.

But instead decriminalize illegal narcotics and have people who are caught in possession of those drugs pay fines instead. Based on how much they posses and if they can’t pay off the fine right way, have them pay it down the line or put them to work for the state until the fine is paid off. Get drug addicts into drug rehab at their expense where they would stay until their doctors feel they no longer want, or feel the need for illegal narcotics. But we also need to change how we deal with other non-violent offenders as well that aren’t involved in illegal narcotics.

California, just doesn’t have overcrowded prisons, because of the War on Drugs. Which is definitely a big factor for California, but other big states like Texas, Florida, New York, Illinois and others. But they also have other non-violent offenders. Like shop-lifters, carjackers, certain white-collar offenders who aren’t suitable for prison. In the fact they aren’t career criminals and not cut out to survive in that type of environment.

Unlike career criminals and violent offenders who are exactly where they should be who also deserve a shot at building a productive life for themselves as long as it starts in prison. And when we have halfway houses and drug rehab things and other community services that do not have to be financed by taxpayers at all. And can be financed by the people who stay at these places by working there. This is exactly what we should be doing for offenders who do not pose a physical threat to society.

California has taken the right steps today, of course under a gun from the Supreme Court. No not literally you can relax, but it’s a step and something they should build on and serve as a role model for other states that are also dealing with prison overcrowding as well. Especially when there are better and even more cost-effective ways in how we deal with non-violent offenders in the United States.