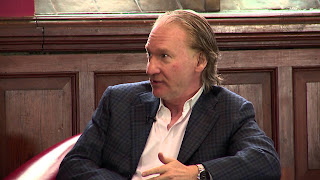 This piece was originally posted at The New Democrat Plus

Bill Maher, I would describe politically as a Socialist-Liberal. Liberal, on personal and social issues, especially freedom of speech. Where he puts basically no limits on it. And neither do I really, other than libel, harassment and inciting violence. But, he’s pretty Far-Left on economic policy and consistently endorses big government socialism and higher taxes on everyone, to pay for new government social spending. And says that government should take over this and that and education is one of his examples. And he’s in favor of a maximum income and other big government socialist policies. And that America, should be like Europe, perhaps across the board.

But when it comes to especially free speech issues and the right to offend, especially when he’s right, I’ve backed him on every single so-called controversy that he’s brought to himself in the last year. As Maher says, he’s the real Liberal when it comes to talking about religion and talking about what he doesn’t like about it. But what separates Maher from lets say Ben Affleck, or Salon, or the AlterNet, or some other Far-Left publication, is that Maher when he criticizes religion, just doesn’t pick on Christianity. The Far-Left, picks on Christianity, because they see it as a redneck religion, that only Southern rural Caucasians follow.

The Far-Left, won’t at least openly criticize any non-Caucasian, especially women and any non-Western religion, because they see that as bigotry, or at least that’s what they say. And what separates a Bill Maher, or Sam Harris, from Ben Affleck and his followers, is that Maher and Harris criticize religion and people that they disagree with and have serious issues with. Regardless of their religion and ethnicity, or race. But again to the Far-Left, the fake liberals on the Left, any criticism of non-Christians, non-Jews, non-Caucasians, people of non-Western descent, is considered bigotry to them. Where Bill Maher as a social Liberal lets say, believes in Free Speech. And that means the right to speak freely, even if you offend people. Especially when you’re right.

Posted by Derik Schneider at 2:06 AM 0 comments