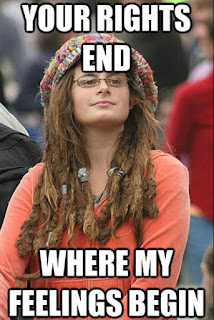 This piece was originally posted at The Daily Review

I swear to God (even as an Agnostic) that the technological revolution of the last 20-25 years has really made America a lot dumber. I don’t think it’s a coincidence that America’s public education system as fallen in the same time. And keep in mind America elected Dan Quayle Vice President in 1988 and Floridian Jews accidentally voted for Pat Buchanan for President in 2000. So that’s pretty stupid and then add America went to war with Iraq over bogus evidence in 2003.

But take that up more than ten years and we now have a generation of Americans who believe that minority Americans have a right to not be offended and critiqued. Even though they live in a liberal democracy that has a guaranteed constitutional right to free speech under the First Amendment. I guess they were too busy texting their classmate who was sitting next to them, or got lost at Starbucks when they should have been learning about the U.S. Constitution. What the hell are you doing at college and drowning in student loans (because you never learned how to swim) if you don’t like debate. If you can’t handle politics that go against your own.

God help us if any of these Millennial’s ever become constitutional lawyers. Because they’ll look at the Constitution based on how they want it to read. Where their political correctness is the law of the land and there’s no such thing as Freedom of Speech, if it goes against their politics. Where the Right to Privacy doesn’t exist if people are engaged in behavior they disapprove of. I mean if I’m in college right now and I know I’m in student debt somewhere around fifty-thousand-dollars or more by the time I graduate, I’m busting my own ass (not my professor’s) to graduate and to learn as much about America and how the real world actually is. Not how I want it to be so I don’t think everything is swell when I enter the world. That I know everything won’t be paradise for me when I leave college.

But that is not the attitude of these Millennial goody two shoes who I guess got lost at a Karl Marx convention and gobbled up everything that Mr. Marx ever wrote and said. And now believe that is how the world should work if not currently works. God help us all if these kids ever to bother to graduate. Because they may end up dumber than when they went in, but now they won’t be a threat just to themselves. But if they were to ever get into power they’ll be a threat to anyone who believes in individual freedom both personal and economic. But especially when it comes to Freedom of Speech. But at least they’ll always have the latest smartphone, or computer, I’m sure paid for by someone else. And everything will still be awesome in their little worlds.

Posted by Derik Schneider at 1:52 AM 0 comments