Senate Minority Leader Mitch McConnell in his first speech in the 111th Congress back in 2009, laid out the Senate Republican strategy at least if not the Congressional Republican strategy as a whole, both House and Senate when Minority Leader McConnell who may be leaving Congress if he’s not reelected in 2014, because he’s going to have a very strong Democratic challenger, but he said his number one goal was to prevent President Obama from being reelected.

The Senate minority party obviously has the power to slow and block legislation. Especially if they are a large minority that Republicans have had in the last three years. The House is a little different obviously, but what the House Minority Leader can do is tell his or her caucus, “you are not to work with the majority party on anything”. And get that memo out to their caucus. “Because we want to use everything they pass and try to pass”, that is the House majority party in this Congress, “against them whether the legislation becomes law or not.” Which is what John Boehner who in President Obama’s first Congress did as the House Minority Leader.

The President of the United States is the most powerful person in the world. Yet that person whoever they are, are limited to what they can do both constitutionally and legally. But politically as well and when you have an opposition party that is strong enough to at least slow you down in Congress and they tell you, “we aren’t going to work with you on anything. And just want to win more seats in Congress and are waiting for you to leave office one way or the other”, it makes the President’s job very difficult to get much done through law. 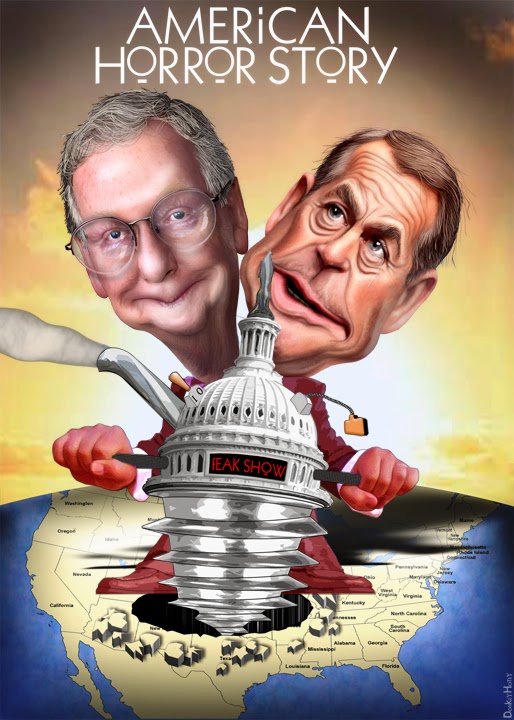 Posted by Derik Schneider at 12:57 AM 0 comments

Business Insider: Report: Brett Logiurato: Anderson Cooper on Arizona Anti-Gay Bill This post was originally posted at The New Democrat on Blogger  Jennifer Rubin, in her Washington Post column today, said that there's nothing in the Bible that says Christians should deny gays service because of their homosexuality. The more of her I read, the more she sounds like an actual conservative, like George Will or Charles Krauthammer, not someone who just calls herself a conservative.  This closes the case, as far as I'm concernd, because this has never been about freedom of religion.  It's been about finding an excuse for discrimination based on sexuality after excuses for discrimination based on race, ethnicity and gender have failed.Discriminating against gays is the far-right's last shot of pushing what they see as their moral agenda and  turning America back to the 1950s. They failed to justify discrimination against racial and ethnic minorities and women and people of religious minorities.  Their one last gasp at discrimination against people whom they consider "other" is now aimed at gays who want to marry.  It is failing horribly for them so they have now moved to denying gays service in the public domain simply because they are gay.No one is saying that Christians or Muslims or people of any other religion can't view homosexuality as a sin but where that stops is how people treat each other and how they act. You can call someone a fag or sinner or anything else you want short of murderer or rapist but you can't physically attack or deny people service because of their sexuality and for no other reason than that. Again this is not about Freedom of Religion but trying to create a freedom to discriminate.The Washington Post: Jennifer RubinIn the end, it was politically, economically and morally impossible for Arizona Gov. Jan Brewer to countenance a state law allowing businesses to discriminate against gays because of anti-gay bias as long as they presented their objection as rooted in religious faith. (What part of the Bible requires a restaurant owner to deny a gay couple a table?) The Post reports: