Lionsgate: Video: Goodnight and Good Luck 2005, How a Newscast Brought Down a U.S. Senator

If I had to rate Goodnight and Good Luck on a scale of 1-10 with ten being the highest, I would give it a 9-9.5. And I saw the movie again a couple of nights ago in preparation for this blog. The only reason I wouldn’t give it a ten, is because it was a ninety-minute movie about one of the most important times during the Cold War between America and Russia and their allies on both sides. This movie should’ve been at least two-hours if not three and they would’ve been able to cover so many more aspects about the McCarthyism in the 1950s.

If you are familiar with the 1950s in America and the so-called red scare about communism and Communists in America, then you are also familiar with U.S. Senator Joe McCarthy and the Army McCarthy hearings that supposedly investigated supposed Communists inside of the U.S. Government. A complete fishing trip inside of an empty bathtub, because Chairman McCarthy and his team didn’t have much if anything to go on. Other than guilt by association. Senator McCarthy saw this as his ticket to the White House after President Dwight Eisenhower.

Edward R. Murrow the anchor and managing editor of CBS News’s See it Now, the CBS nightly newscast before the CBS Evening News, knew what communism was and who were the actual Communists. Because he covered World War II in Europe. And didn’t believe that Americans who weren’t Communists should be stuck with the label of Communists. And he and Fred Friendly and their team at See it Now, without having the backing of CBS News and the broader CBS network, decided to go after McCarthyism and expose Joe McCarthy for what he was. Which was a political opportunist and a right-wing fascist. Who saw Americans who didn’t look at the world the way he did as Un-American.

Murrow and Friendly expose Joe McCarthy for what he really was by going after him the way any good news organization would. By using the truth against McCarthy. Using his own words and documents against the Senator. And with Murrow doing a nightly editorial after their reporting on the McCarthy hearings about dangerous fascism and guilt by association is. And George Clooney who plays Fred Friendly and David Strathairn who plays Ed Murrow, do a great job of showing who the real Friendly and Murrow and the See it Now crew take down Senator Joe McCarthy. 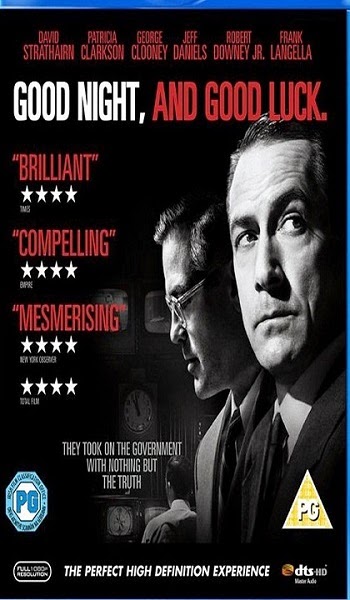 Posted by Derik Schneider at 2:23 AM 0 comments