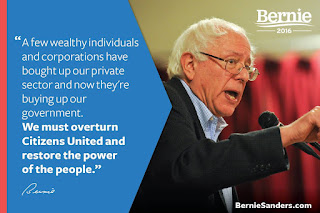 Salon: Opinion: Simon Maloy: How The Socialist Brings Out Their True Colors

That is the main effect that a Bernie Sanders presidential campaign will have on the 2016 presidential race. People who up until now called themselves Progressives, or even worst, at least from my perspective Liberals, even though they represent the Far-Left in America, will now call themselves Socialists, or Democratic Socialists. Because, that is what their leader calls himself and they share his politics.

Actually, even though Senator Sanders is the only self-described Democratic Socialist in the U.S. Congress and I emphasize self-described. He’s fairly moderate and mainstream to people who will be supporting him. He might even be moderate and mainstream to a lot of the Congressional Progressive Caucus, which he’s a member of, with most of the CPC members being in the House. I bet most of the CPC members in the House couldn’t get elected statewide. To use as an example, they need gerrymandered districts to keep getting reelected. Senator Sanders, represents the Socialist Republic of Vermont, as its called, but we’re still talking about an entire state. Not just part of one.