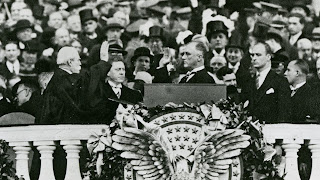 This piece was originally posted at FRS FreeStates Plus

When Franklin Roosevelt became President in 1933, America was in the worst economic condition in its history, at least in the 20th Century. And since the Great Depression obviously and moved quickly to deal with it. With his New Deal agenda that was a collection of brand new social insurance programs from the Federal Government. Unemployment Insurance, Welfare Insurance, Social Security, public works programs and other programs and has been credited gor getting America out of the Great Depression. President FDR, is the father of the American safety net. A collections of Federal social programs to help people when they’re in need. And can’t financially support themselves.

President Roosevelt, should get credit for that, but not his New Deal getting us out of the Depression. By the time America got involved in World War II in 1941-42, we were still dealing with the Great Depression. And at best were going through a severe recession. We still had 20% unemployment and 50% poverty in the United States. By 1942, almost nine years after FDR became President. If you look at when the United States finally broke out of the Great Depression, it was during World War II and after World War II. That President Roosevelt committed us to, because of all the new jobs that opened up in America. With all the new military spending and work needed to produce those parts. And with everyone being drafted in the military. And with these workers going oversees, that opened up more jobs at home.

President Roosevelt, is one of the greatest president’s we’ve ever had. And deserves credit for it, but mainly because of his foreign policy success’. And also to call him a Liberal Democrat or even Progressive Democrat, just doesn’t fit. He was a Progressive on economic policy obviously. But had neoconservative leanings when it came to national security. With his detainment Camps for ethnic-Japanese, Italian and German-Americans. Because of their ethnicity. The Roosevelt Administration, inherited such a huge hole in the economy from the Hoover Administration and didn’t have a clear outlined agenda for exactly how they were going to deal with. They had a bunch of experiments and ideas, sure. But didn’t know exactly how they were going to respond to the Depression. And they did the best that they could to deal with it.

Posted by Derik Schneider at 2:20 AM 0 comments