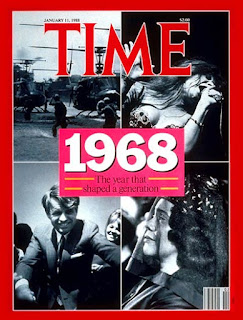 This piece was originally posted at FRS Daily Journal on WordPress: History Channel: 1968 With Tom Brokaw

1968 was one of if not the most explosive years in American history, for good and bad. With everything that happened that year from political assassinations, with people being freed to be themselves and live the way they want to. With all the good movies and music that came from this era. With the sporting events, as well as a new political movement in America. That emerged on the Left-Wing and what I call the New-Left in America. The Far-Left even that came into the Democratic Party. That was anti-establishment, anti-war, anti-capitalist, anti anything that was previously done in America that seemed as part of the establishment. The mid and late 1960s was changing to the point that for people who weren’t Baby Boomers and were older, were seeing a completely New America.

The term New America I believe gets thrown around a lot and has become another corny catch phrase in American pop culture especially. But we did become a New America not in 1968, but go back to 1964 and perhaps even 1963 when the civil rights movement became mainstream in America. 1968 is that year where America became that true melting pot and where we became that country that just didn’t claim to believe all of those great liberal democratic values of opportunity, diversity, tolerance, individual freedom, freedom of choice, speech, tolerance etc, but we no longer just claimed those values, but actually owned them. We were no longer just a great melting pot ethnically, racially and everything else, but a country where all sorts of Americans became free to be themselves and live their own lives.

Culturally, the 1950s America that the Christian-Right and Neoconservatives, have tried to move America back to ever since, it didn’t end in 1960 or even 1968. That culturally collectivist decade ended in 1963 or 64. But 1968 was a year where the right-wing came back and took on all of these millions of Baby Boomers who represented millions of Americans of all sorts of ethnic, racial and cultural backgrounds and got behind Richard Nixon for president. And where these New Americans stood their ground. And that is where you see this cultural battle, Cultural War even that is still going on America today. Between Americans who want their 1950s back. Versus Americans who want to continue to progress and create an America that works for all of us.

1968 is a year where you see two America’s emerge. They were always there, but thanks to Hollywood and TV, they became obvious to most Americans. An America who saw things in black and white and if you saw things differently they would view you as Un-American. Versus an America that didn’t see things so simplistically. Who didn’t believe women’s place was necessarily in the home. That women should be able to make this decision for themselves whether to work at home and run the house, or work out of the home for money. Where our religious, ethnic and racial diversity, became celebrated. Where equal rights and diversity were celebrated in the New America. In 1968 you saw young adults essentially taking on their parents and grandparents in this new Cultural War.

America, went through a lot of hell in the 1960s with all of the assassinations and the Vietnam War. The violence that came about against the civil rights marchers, to use as examples. But with all of that violence and chaos came a lot of positive things as well. A Cultural Revolution where millions of Americans and not just Baby Boomers, but my Generation X and Americans after that, were given true American individual freedom to be themselves. So in that sense at least and from my perspective, the 1960s and 1968 even, the most explosive year of that incredible decade, was a great time. It was a time where millions of Americans were given true individual freedom to be themselves. And with what comes with individual freedoms, comes personal responsibility as well. So Conservatives should support this as well.

Posted by Derik Schneider at 3:23 AM 0 comments