Forget about the records with the Bears being 12-0 and obviously the best all around team in the NFL in 1985. And the Dolphins being 7-5 at this point, I believe fighting for the AFC East Championship, or make it as an AFC wildcard. This was a great matchup and one of the best NFL Monday Night Football games of all-time. Even with Joe Namath and O.J. Simpson in the booth with the great Frank Gifford. Instead of Don Meredith and Keith Jackson, or Al Michaels and Dan Dierdorf. Because of the style both teams played and what they were great at. And that the Dolphins might have been the only team in the NFL in 85 that had the personal and head coach to beat the Bears.

The only way you beat the Bears that season was to have a great big quarterback, with a strong accurate throwing arm, with a quick release. They had that with Dan Marino, obviously and perhaps the best NFL QB in the game at this point. But then you also needed multiple receivers who were quick and had great hands. The Dolphins had that with Mark Duper, Mark Clayton and Nat Moore. And then throw in Tony Nathan out of the backfield. And then you needed a great pass protecting offensive line. That was quick and not only being able to take care of their man, but get to blitzers as well. The Dolphins had that as well.

If this was the Super Bowl matchup in 85. The Bears would’ve won and perhaps had won going away. Not 46-10, which is how the beat the New England Patriots. But 35-17, 35-21, something like that. The Bears would’ve adjusted on defense and not of blitzed as much. And they would’ve had Jim McMahon at QB instead of Steve Fuller. But the Dolphins would’ve still moved the ball well enough to make a decent game out of it. Because they would’ve been able to spread the Bears out on defense and get rid of the ball quickly and utilize all of their receivers. And hit Tony Nathan for short gains after their big plays. Because the Bears secondary didn’t have a lot of speed. And the linebackers weren’t great cover defenders either. 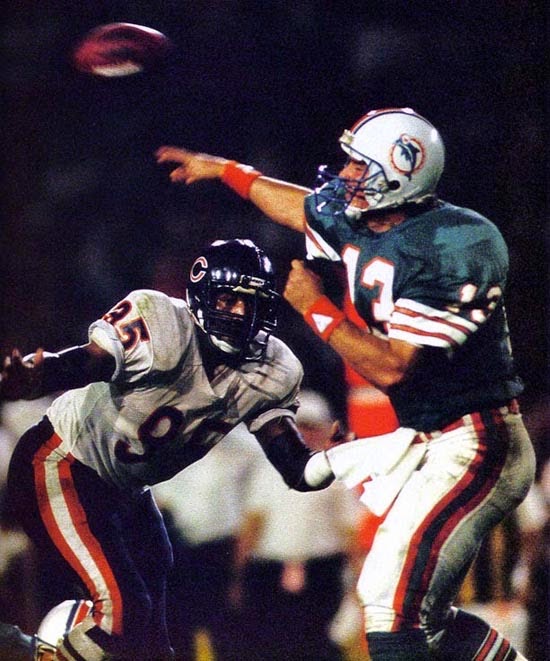 Posted by Derik Schneider at 1:28 AM 0 comments