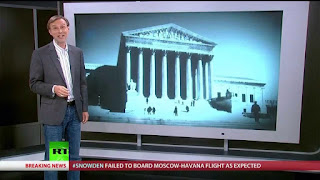 This is why I have a hard time respecting a lot of the arguments of todays so-called Progressives, that I call Social Democrats. Because they are so short-sided and go off when they see something they disagree with. And say, “because of this, we must blow up the system and do something different and completely change the ways we do things.” Where was this editorial three weeks ago, or a month ago and why does Thom Hartmann wait until a ruling on the Voting Rights Act from this week, to go off on the Supreme Court? There are short-sightedness on both the lets say further Left and further Right and not saying this only belongs on the Left. But judicial activism as Senator Lindsay Graham whose obviously not a Liberal, but as the Senator said at both Elena Kagan’s Supreme Court confirmation hearing as well as the Sonia Sotomayor, Supreme Court hearing, to quote Senator Graham, “judicial activism are decisions made by courts that someone, or some people disagree with.”

The way our branches of government are supposed to work is that the legislative branch made up of our bicameral Congress of a Senate and House of Representatives, is supposed to do the legislating and oversight over the executive branch. Meaning the administration that the President leads and the judicial branch, our court system where the Supreme Court is our highest court, the executive branch is supposed to enforce the laws that the President and Congress agree to. Both the House and Senate working with the President. And the judicial branch is supposed to interpret the laws what they mean and are they constitutional, or not and. Can overturn laws not based on whether they agree with them, or not, but whether they are constitutional, or not. So in Chief Justice Roberts case who personally disagreed with the 2010 Affordable Care Act, but ruled in favor of it, because he believed it was constitutional. Not that he agreed with the law which is a different thing.

The Supreme Court didn’t throw out the entire Voting Rights Act and rule that as unconstitutional. Which I believe would’ve been judicial activism. Because whether you agree with the law, or not it’s clearly constitutional under the Equal Protection Clause. But what they did was throw out a section of it. That had to do with how the Federal Government regulates state voting laws. And gave Congress the option of rewriting it to fix that law. I disagree with that decision, but it’s not an overreach even though with the makeup of todays Congress. It looks that way with the Republican House probably not bothering to take that up.

Posted by Derik Schneider at 1:52 AM 0 comments